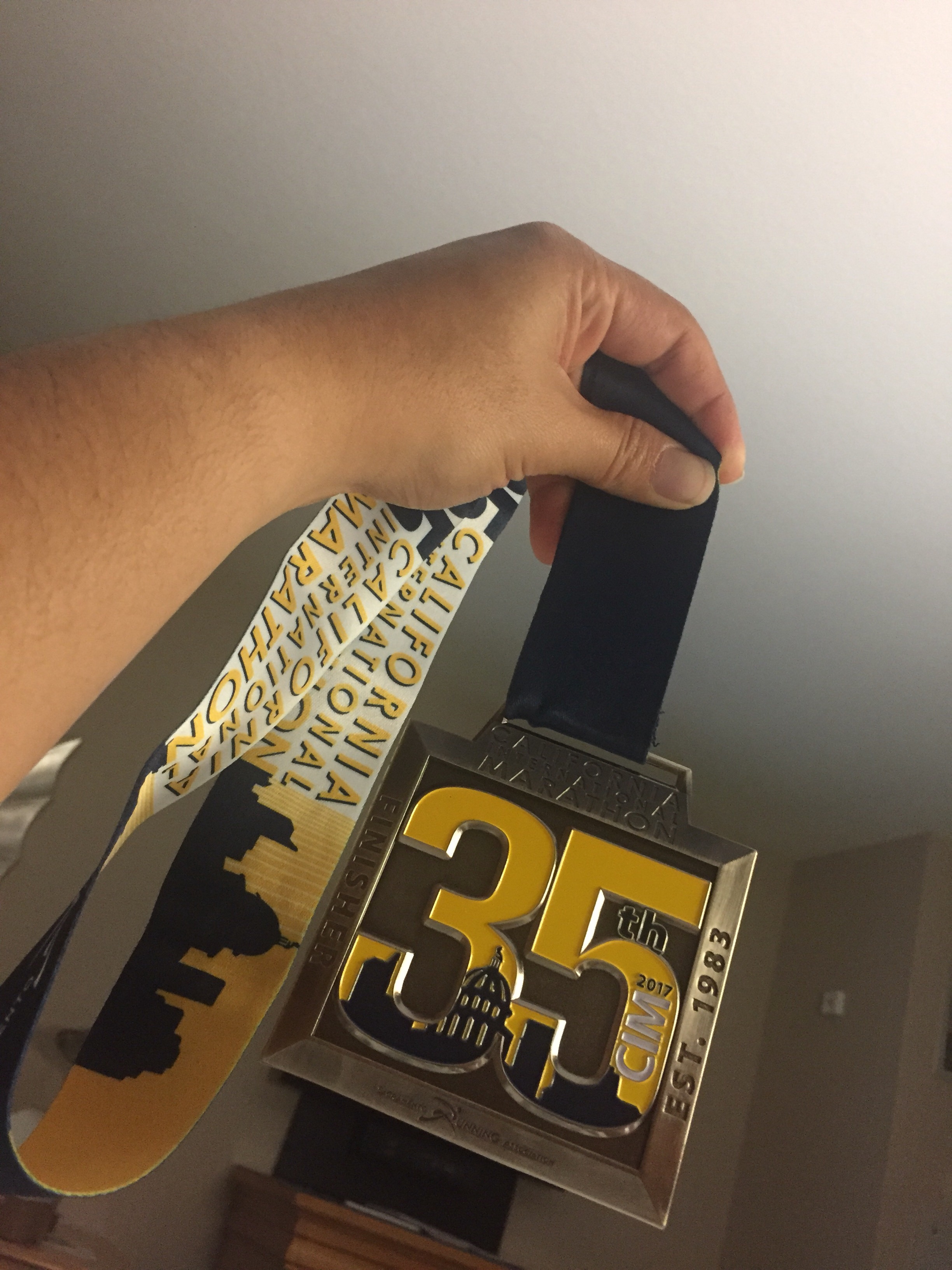 In January I was chosen as an ambassador for the California International Marathon. An honor I was not expecting. I had spent the better part of 2017 sharing my joy, spreading a discount code and celebrating running through my social media. I had big plans to lose weight and get stronger before marathon training began. That definitely backfired on me and all did not go according to plan. In fact, I put on about 20 more pounds over the course of the year. My training was completely derailed when the Santa Rosa fires struck and I couldn’t run outside for two weeks. Finally, on November 5th, I decided I wasn’t going to run the marathon. I was 13 miles into my 17 mile run. I gave up. I called for a ride. My head won. I emailed to downgrade to the relay. I texted my running coach. I let my doubt get in the way. I waited for a feeling or relief to come and it never did. I imagined myself getting a relay medal instead of the 35th annual marathon medal and not being able to say I ran my second marathon. I felt disappointed that I had let myself give up so easily. Then, in a moment of clarity, I got home (we had been staying out of town), put on my running shoes and went back out and finished the last four miles. And decided I was worth putting everything out on the line for. So I took back my quitting and knew it was going to be a long road to 26.2, but made up my mind to complete my goal.

This weekend I kicked it off on Friday and enjoyed some amazing time at the CIM expo. First I picked up all my stuff and spent a bunch of money (oops!). 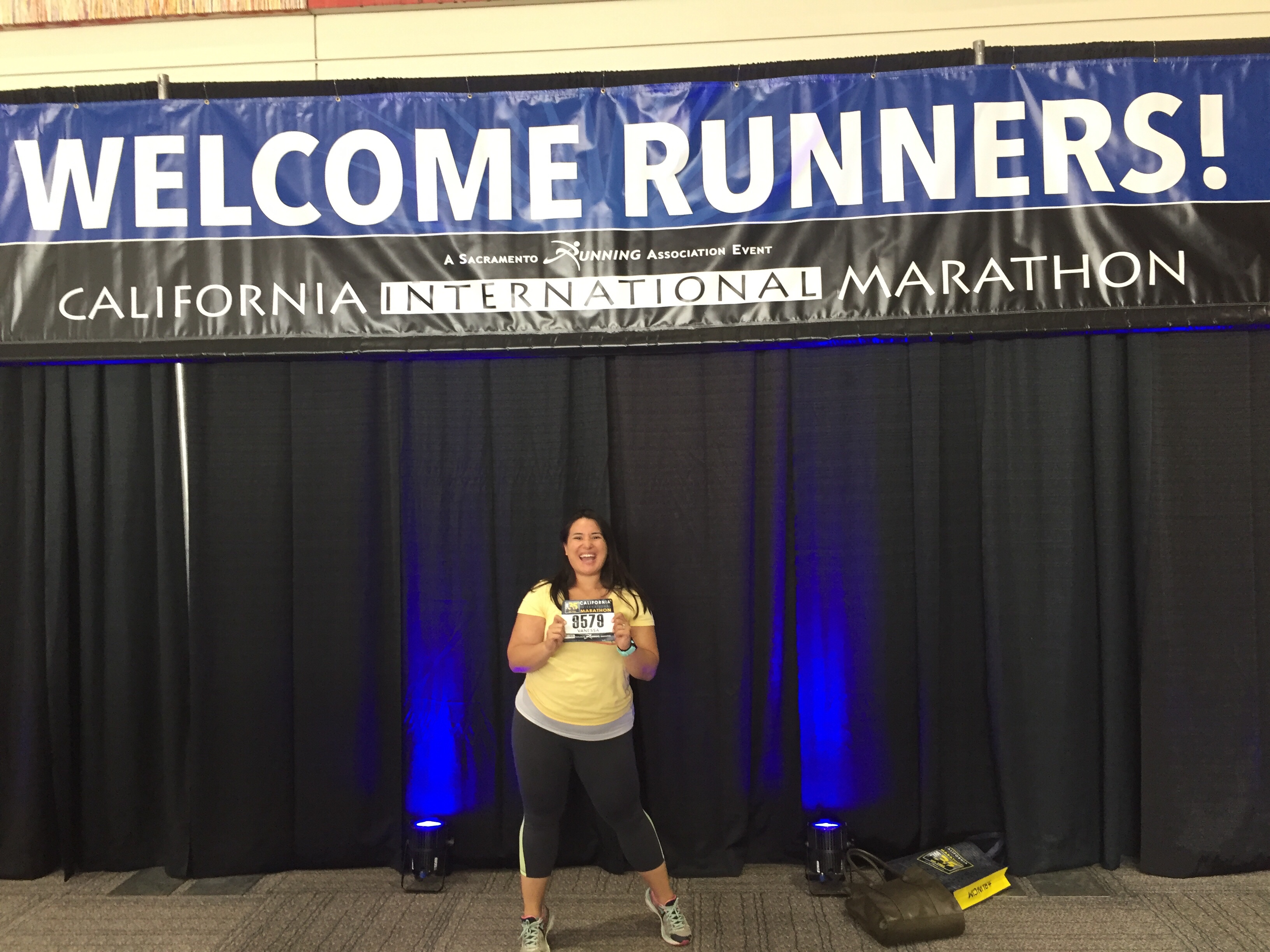 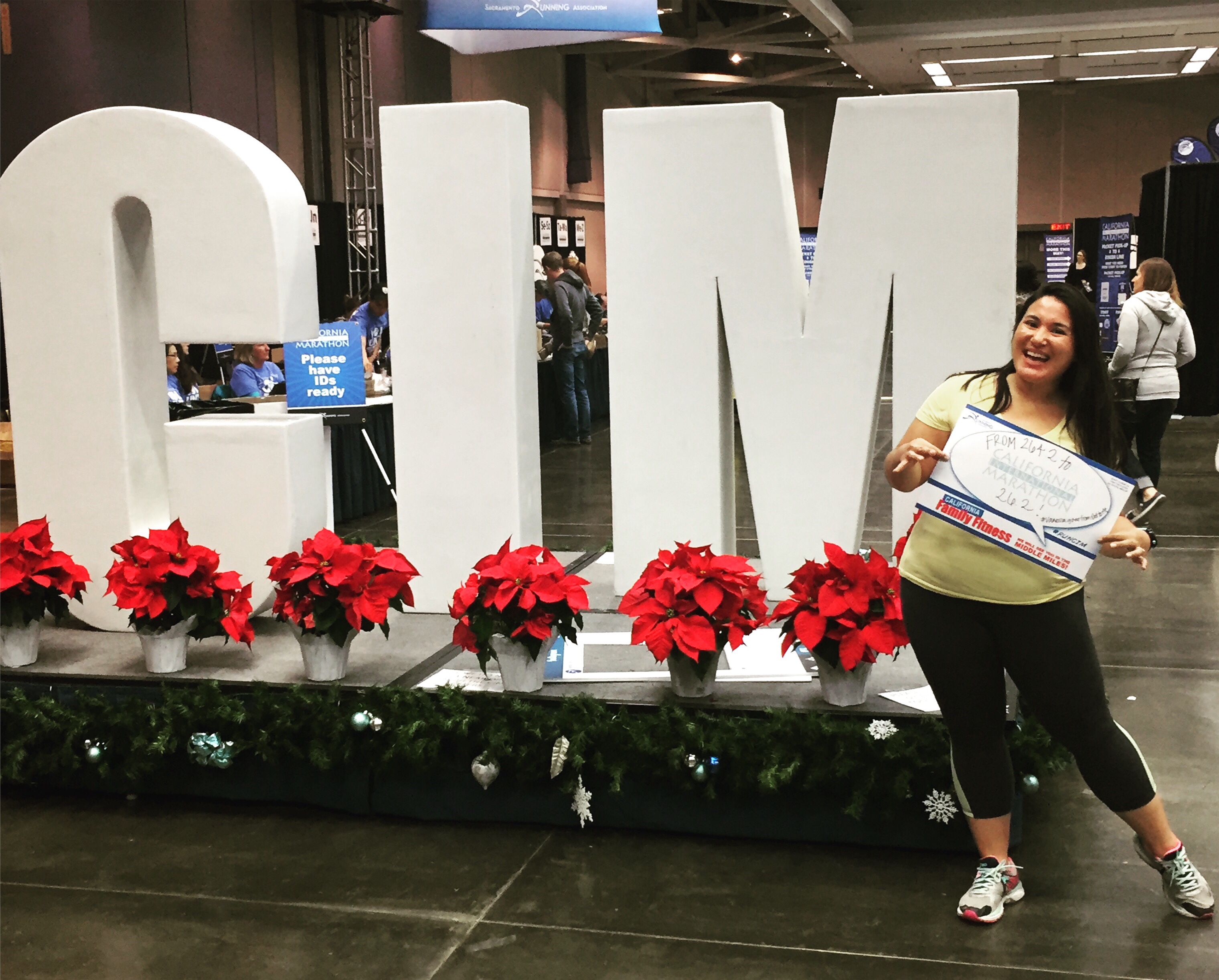 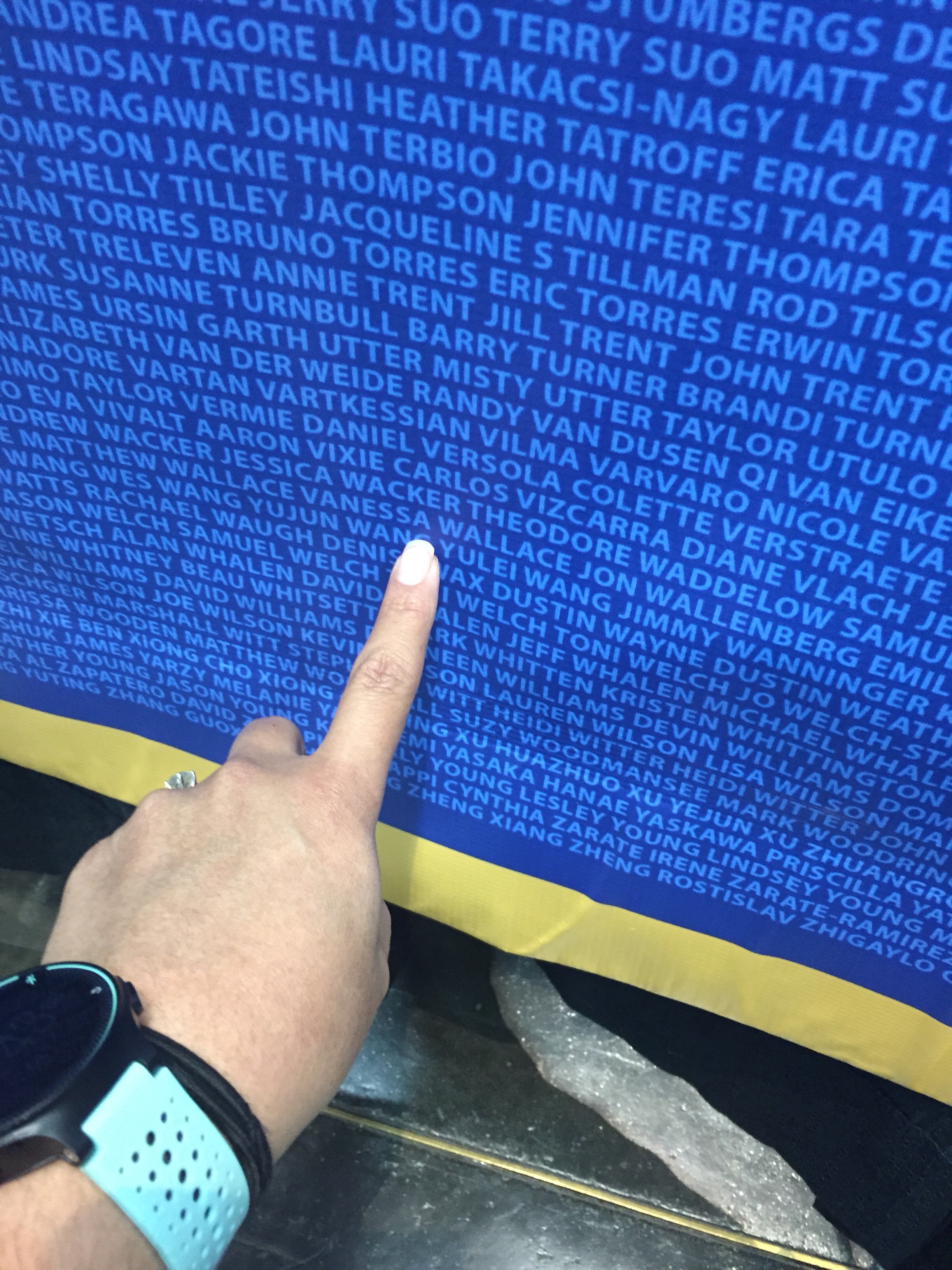 Then I had the opportunity to volunteer at the expo. I love volunteering for events when I can! I also got to meet fellow CIM ambassadors which was a treat. 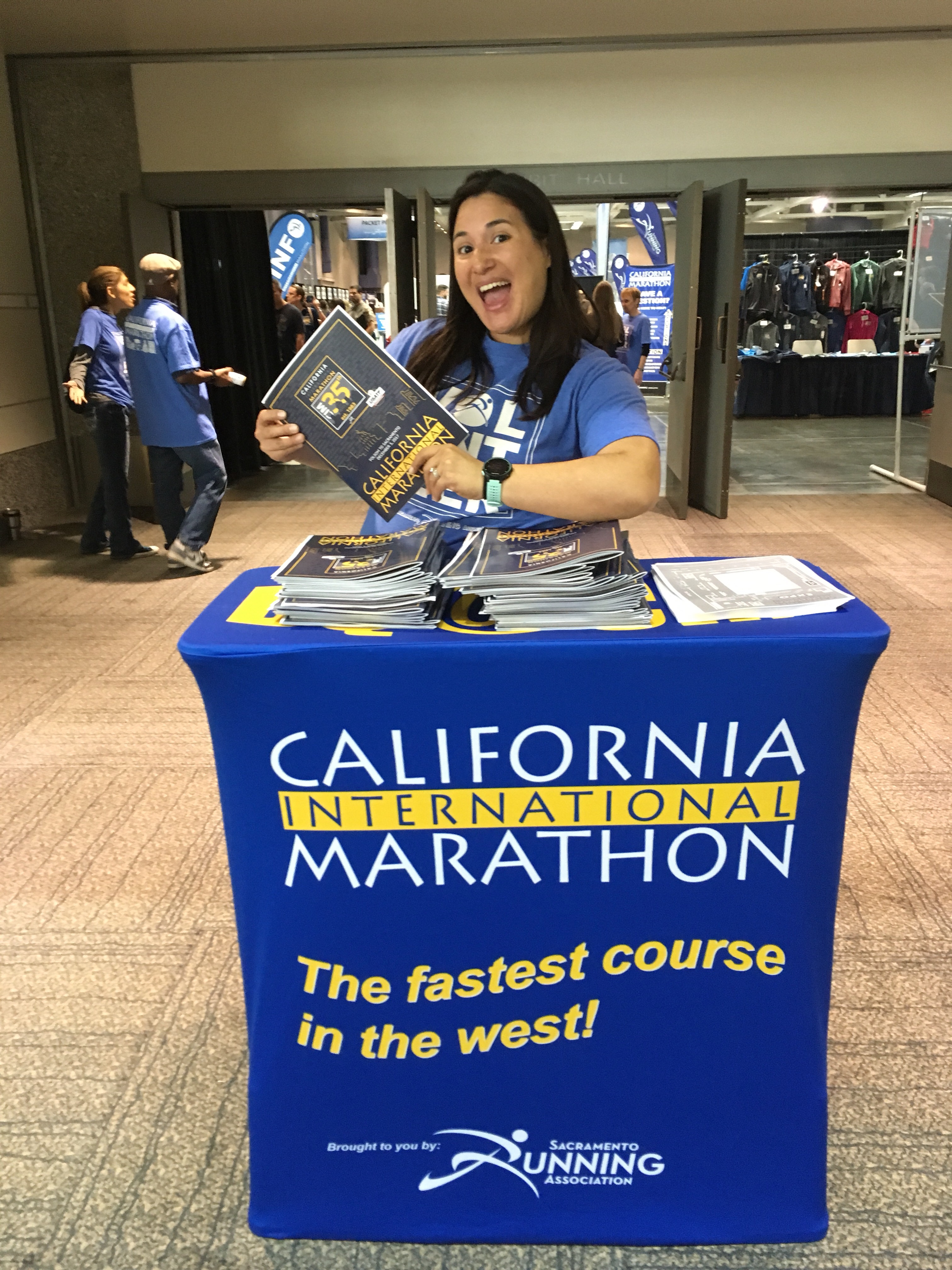 After enjoying some pizza and ice cream with family from the area, I tucked myself into bed.

Saturday morning there was a shakeout run. It was a great way to get in a few miles. I ran with one of the CIM ambassadors Stephanie (blogger at Run Strong Run), who I have tried at two different events to meet up with! I ran two miles but then walked back to the Capitol building for some fun photos and a dance party video 😊 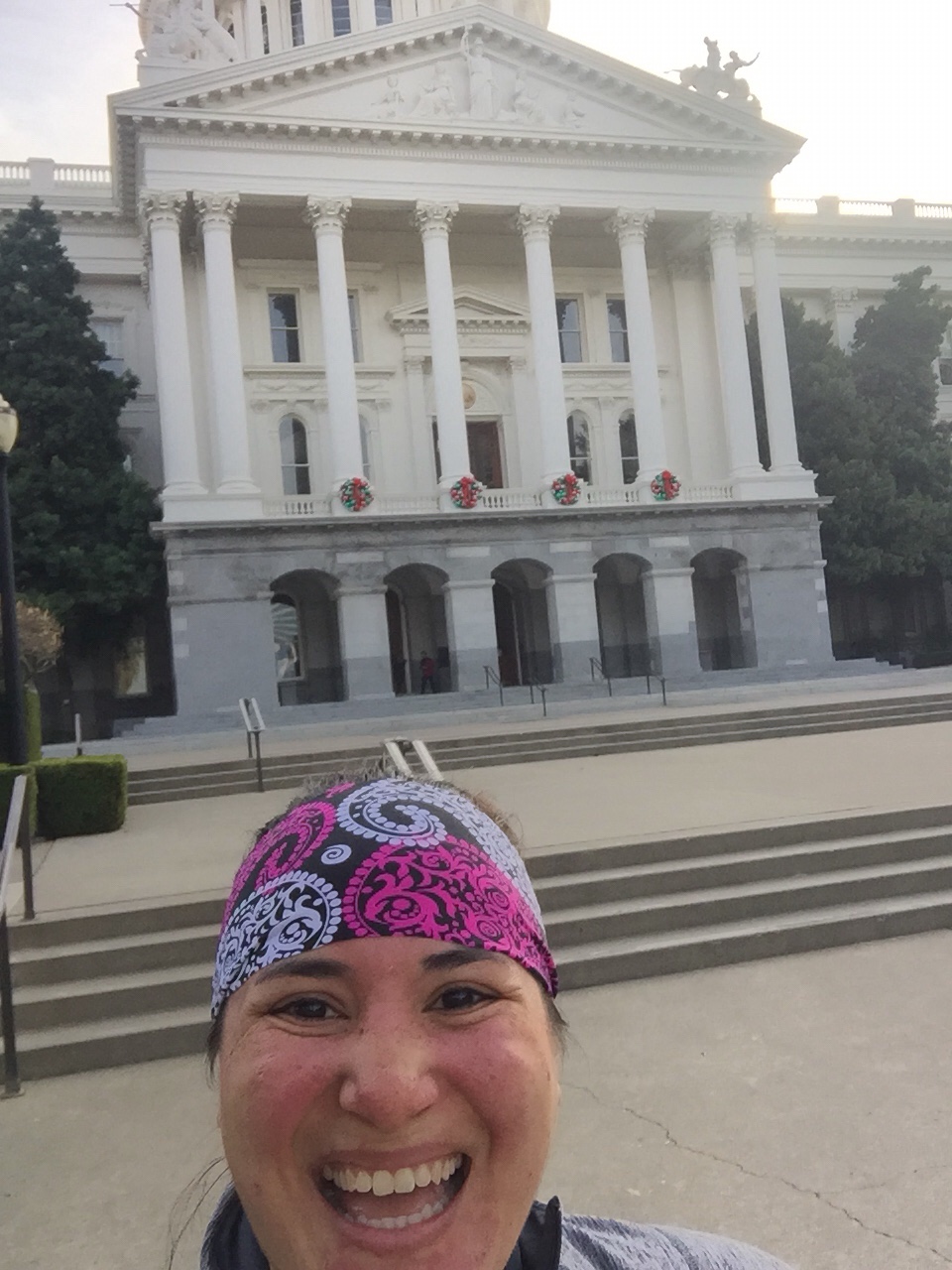 Sunday: race morning<<<<<
ut of bed at 3:30 and fought with an unhappy belly for a while. I got dressed and got in line for the bus at 4:45. You have to take a shuttle from Sacramento to the starting line in Folsom because it's a point to point event. It was early! On the bus I thought to myself that my former 264.2 pound version of myself would never envision my current self running a marathon. That feeling was a good way to start the day.

I got to the starting line around 6, and went to the bathroom a few times (I was paranoid and went like three times lol), checked my gear and waited to start. I found Stephanie again who was unofficially pacing the 6 hour group. Her Christmas tree headband was the best! 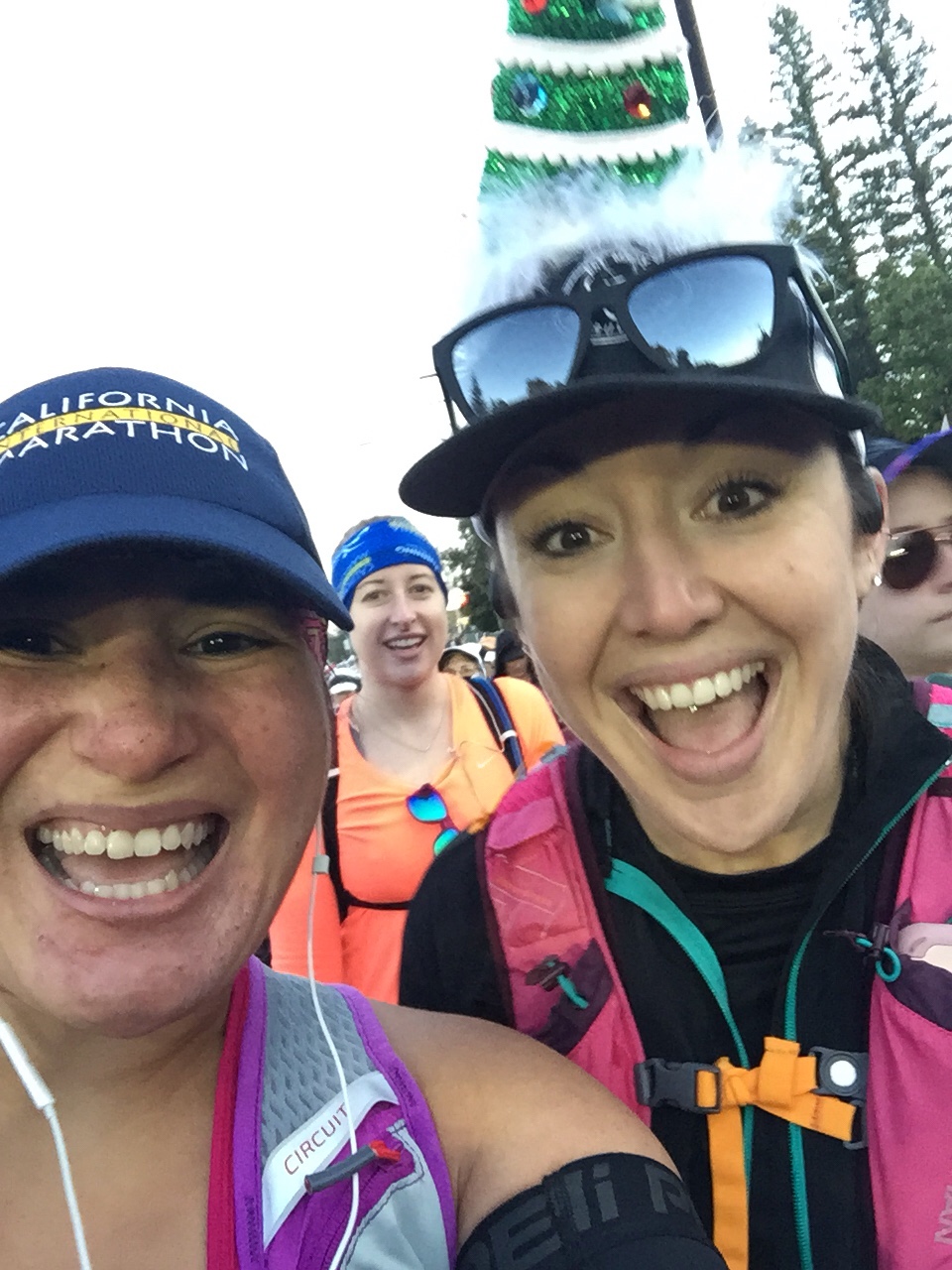 he first ten miles seemed to fly by. It was strange how quickly those went by for me. There were rolling hills and I felt really strong and good during them. Flip side was that I probably spent a lot of energy on them. I was so focused on staying as close to the cutoff pace as I could (6 hour cut off), that I tried my hardest to hold on to those 13:44 miles. I was good for a while until about the 13.1 when I started to slow down. I was doing 4:1 Run:Walk intervals. I told myself after I got to 13.1, to get to 16. Then I told myself to get to 20. Then I told myself to get to 23, and finally to finish. I was so lucky to see Ann and Mary along the course, two awesome ladies who have done CIM before and are local to the area and are Facebook followers. 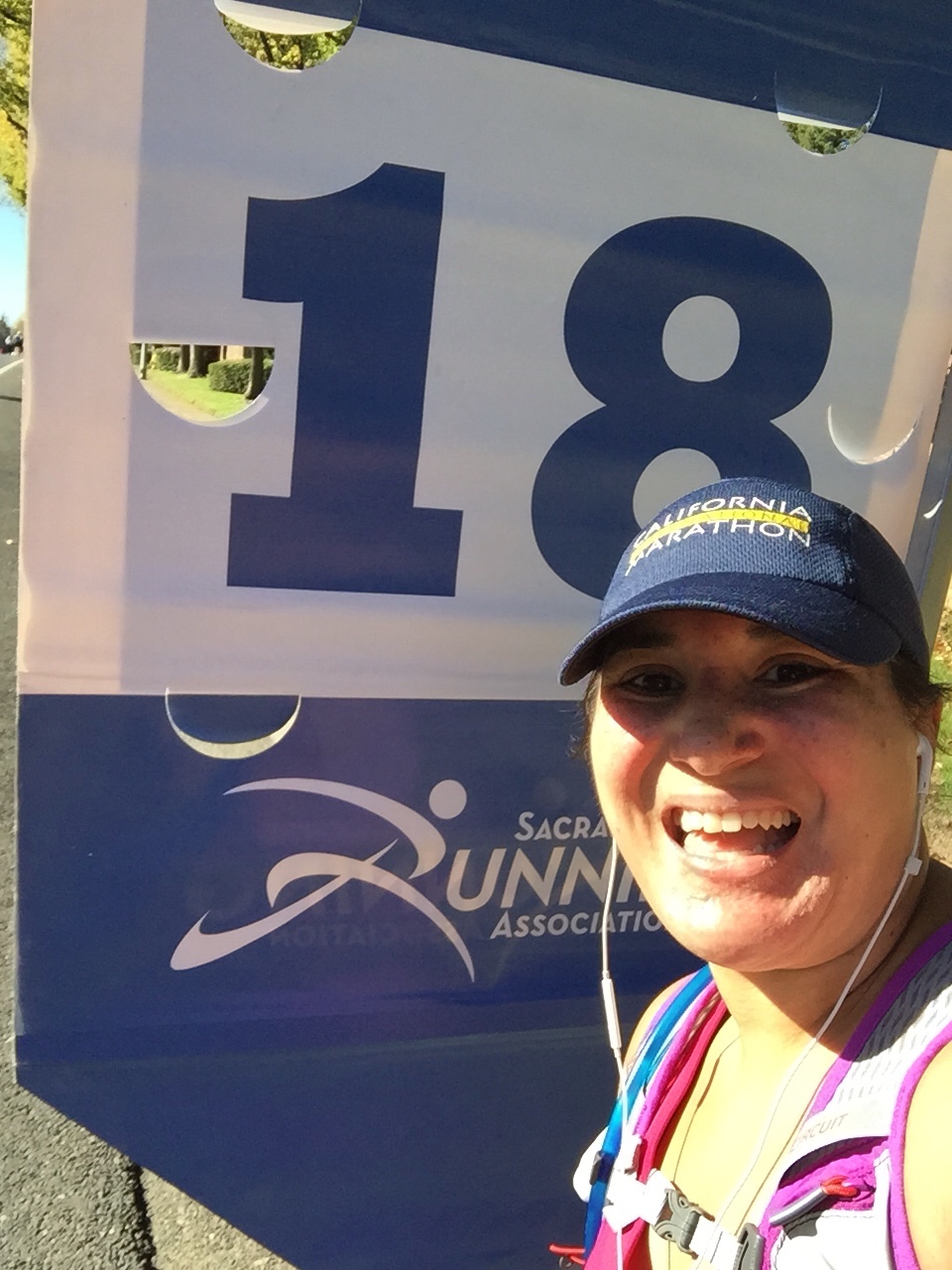 t mile 18 I really wanted to give up. I was so tired and had so much longer to go. My dreams of getting to the finish line before the 6 hour cut off were long gone and I was just hoping a volunteer would still be there with medals when I got there. But I knew I couldn’t give up. I had come too far to give up now. So I changed my intervals to 2:3 Run/walk and just told myself to finish. I hit the wall around mile 22.6, but just kept doing what I could. I was GOING to finish.

And suddenly I was at mile 25. I don’t know how it happened. I turned a corner and recognized where I was. I saw the Capitol building. I knew I was close. I picked up my pace and suddenly could run again. I saw a fellow CIM ambassador Art, who cheered me on, giving me the boost I needed. And I gave literally everything left that I had. Every ounce of it. And at this point, I started crying. I had achieved the unthinkable. I had done something that felt so unattainable. And after 6:41:19, I had done it. I had run my second marathon! 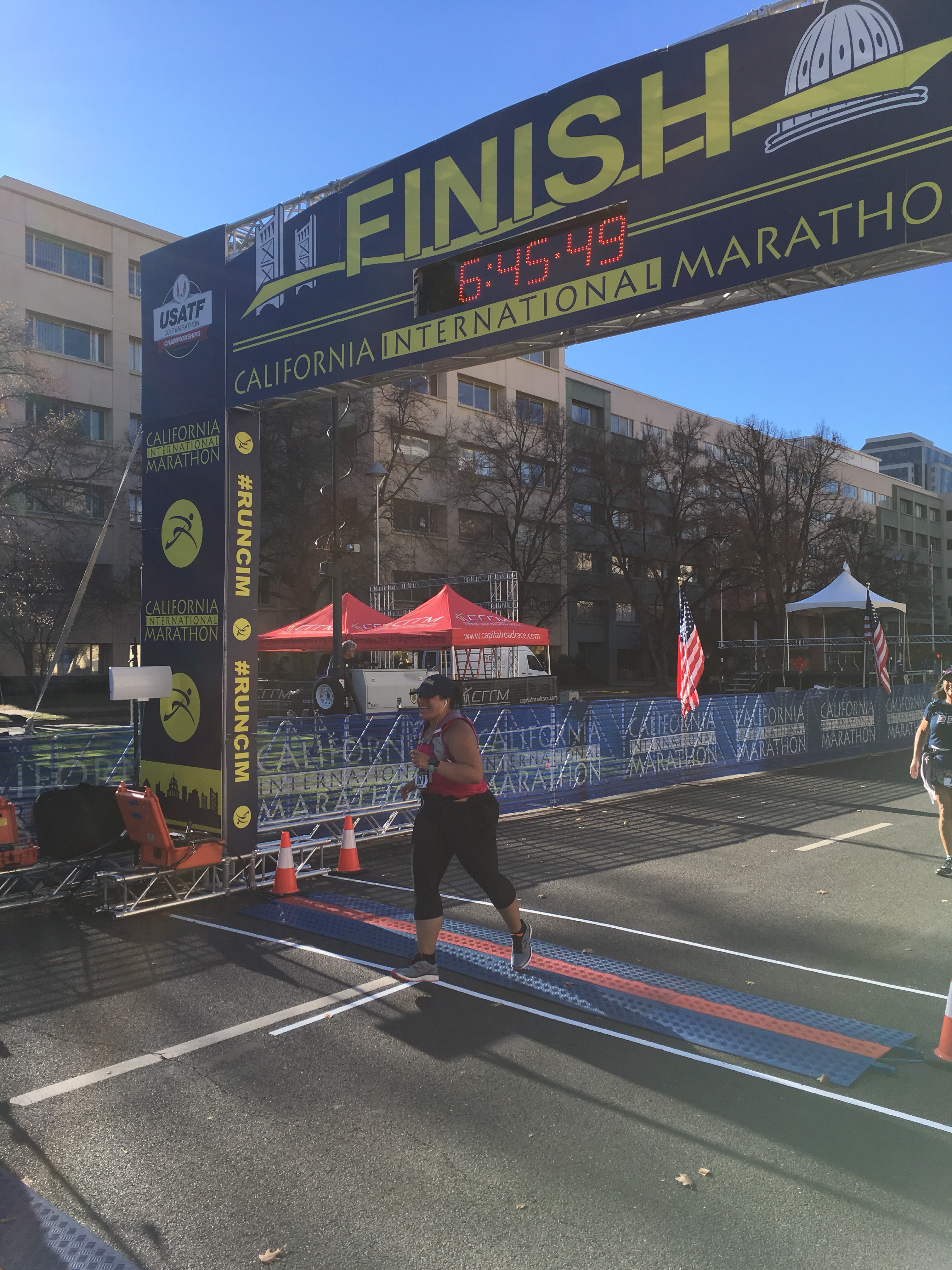 <<<<<<
ugh it was the hardest thing I have ever accomplished, even harder than my first marathon, and it made the victory that much sweeter. 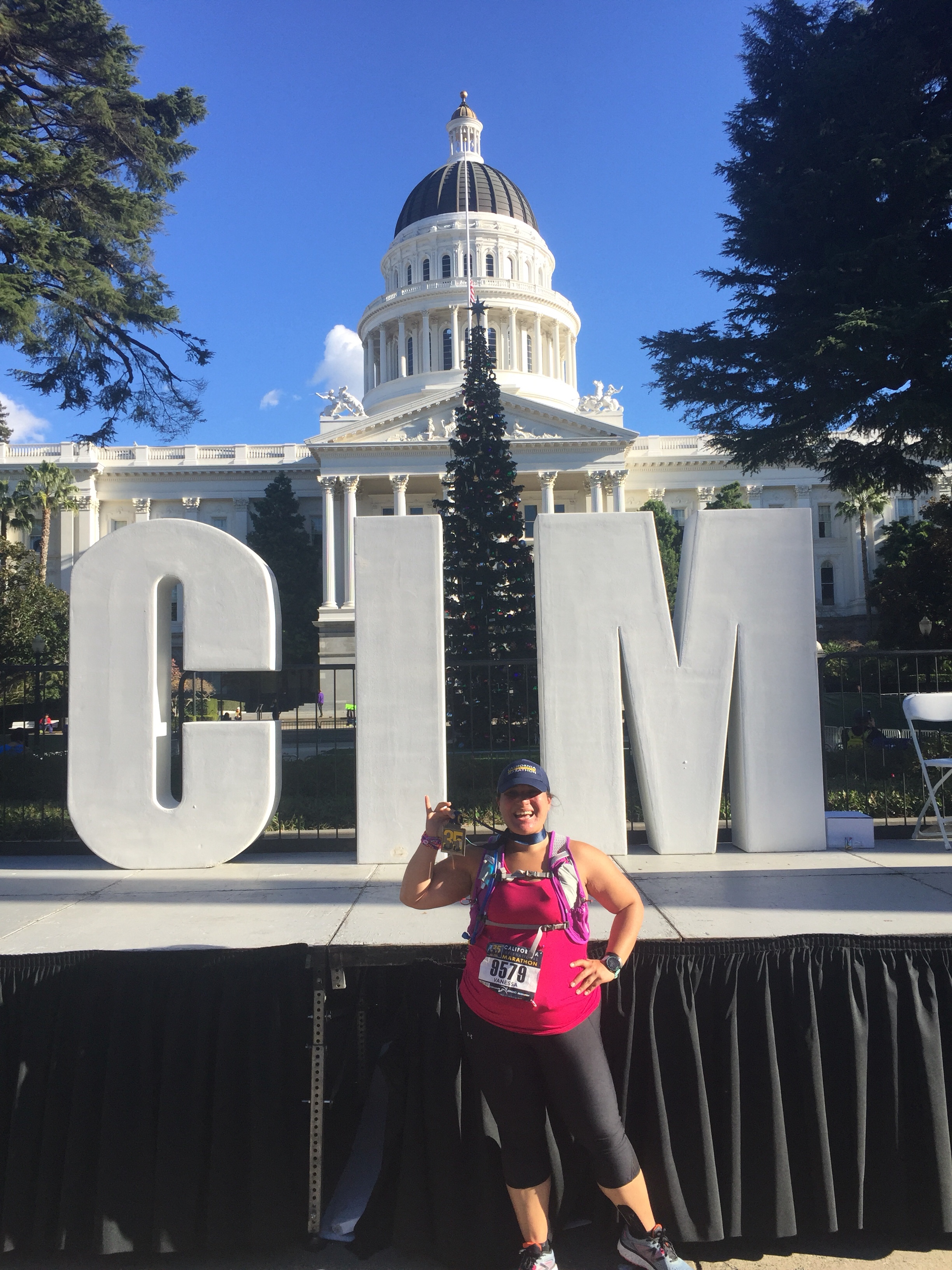 It wasn’t the best training I’ve had and I don’t feel size wise and Fitness wise where I would prefer to be, but it is a sweet victory to celebrate. I realized this weekend that because I have different goals that aren’t as elite as other runners, that does not take the value away of my goals nor does it diminish their accomplishment. I didn’t PR or BQ like other runners were shooting for but I finished my marathon. And that is something to be celebrated.

I may already be debating what Fall marathon I’ll be tackling in 2018…. but first I think I’ll rest up a little and stick to shorter distances.

Thank you everyone for your support. I am so grateful to have achieved this goal with you behind me❤️