Skip to content
December 16, 2017 Vanessa Goes From Fat to Fit

If you haven’t heard the story about why I started running, the short version is that my coworkers at my old job and I signed up to do a 5k mudrun many years ago. I had such a fun time that I told everyone I was going to run a half marathon. I had no idea how long a half marathon was, but true to my word, I ran my first half marathon months later. Now here we are two and a half years, ten halfs, and two marathons later.

Because I didn’t run my whole life, I’m not fast. I am traditionally not one of the last people to finish, as I tend to hang mid-pack. The experience was different at my marathon though. I knew I would be towards the back. I also knew that it was entirely possible I would be one of, if not the last, person to finish. I was nervous about it. And a little ashamed to realize I might be the one closing down the finish line after 26.2 miles. It was a scary thought for sure.

We are all setting out for the same 26.2 mile goal but someone has to be last.

It seems like a total “duh” statement. But there’s more to it that stuck with me.

Races can be intimidating sometimes. I toe up to the start line with some seriously amazing people. People who run mile times I dream of, or distances that blow my mind, or are in such good shape I wonder if they spent their whole lives being active. But we don’t see peoples back stories. How much work they put in. The early alarms to get up and work out. The sacrifices made. The internal monologues and dialogues that happen. Everyone has their own story.

All I know is what I know about myself and my capabilities. I am capable of doing whatever work I want to put in to achieve goals, and there are people who may look at me and wish they were where I am. It’s all perspective. I’m comparing my chapter 1 to other people’s chapter 20’s. But some people may look at where I am at, and in comparison to where they are, I am at their desired chapter 20. 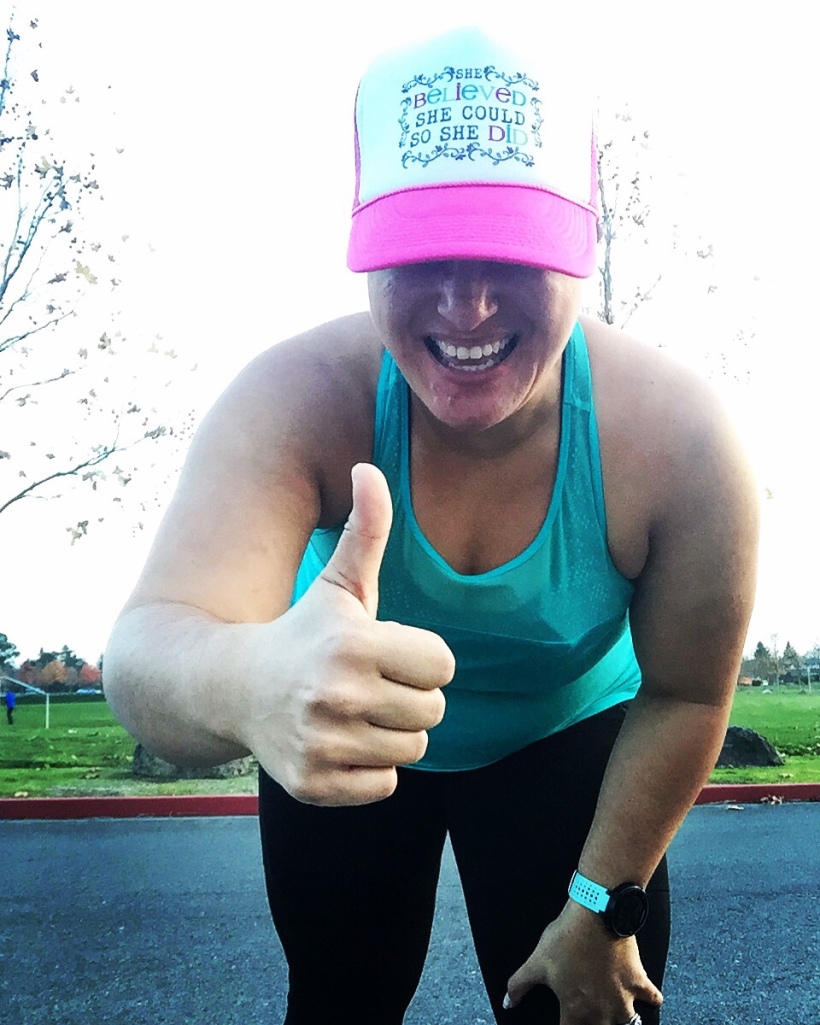 At my race this morning I ran without music and I felt like my mind was full of great thoughts and comparison of how similar watching others lose weight can be. We can often find ourselves stuck in a rut while seeing others experience more success and we wish we were there. But of course, we don’t know the work they’ve put in to get there. The sacrifice it took. The times they had to say no to cookies, the times tears were shed in the dressing room when pants didn’t fit. The work that is put in.

Much like running, in weight loss there isn’t always someone cheering for you. There are a lot of times we fight our own internal battles. We talk ourselves through crappy meals or crappy runs, or bad choices, or times we give up. We talk ourselves through disappointment of thinking you’re going to hit a PR or instances where you thought you would lose enough weight to fit into a certain dress on a certain day but that doesn’t always happen. In running and weight loss, you set a goal and people may look at you and say “wow you’re so lucky that you’ve been successful” but you know it isn’t luck. It’s hard work. You study the menu before you go out to eat, or you run on the treadmill when it’s raining because you have to.

Running and weight loss have reminded me that you can’t just stop – you keep going. You can take a pause, or break, or be flexible, but you can’t give up. There are people who give up. There are people won’t don’t show up at all. It can be frustrating to see the success of others and feel like you’re behind on the bandwagon, but again, we all set out on the same goal but someone has to be last. I’m not saying it’s a competition with losing weight, but what I am saying is that we are all working towards the same goal with very different back stories.

It would be easy for us to just watch from the sidelines and never needing to compare ourselves to others because we never started.

I have become mentally stronger and am so proud of that. I would rather be last than to ever give up on being my best. That’s what I have learned from running this year.