On Sunday, December 3rd, Weight Watchers announced changes to their current program. For those of you who aren’t WW members, the WW plan (prior to the change) is that everyone gets a daily target of points to eat each day, and a set of weekly points that you can choose to eat or not eat at your desire. Every food has a smart points value and the higher in sugar or saturated fat something is, the more points it is, and the higher in protein something is, the less points it is. The only exception is that all fruit and most vegetables are 0. For reference on that plan, I got 30 points a day and 42 weekly points.

The changes to the plan maintain the same algorithm of calculating points, however, the list of foods that are 0 points has grown to now include lean proteins (chicken and turkey breast), fish, plant proteins, nonfat yogurts, eggs and all vegetables except potatoes. In turn, daily points targets have decreased to compensate for this exchange. Additionally, if you do not use four or less of your points a day, they roll over into your weekly points. On the new plan, I get 23 points daily and still get 42 weekly.

This plan launched the day I ran CIM, and so when I went to my Monday night meeting I switched over. I did not, however, really abide by the plan because I was ravenous for DAYS after the marathon and went to two holiday parties and I gained that week. I am NOT blaming it on the plan change. My first real week where I focused on the plan, was December 10 through 16.

Let me start by saying I eat most things but one thing I CANNOT STAND is beans. Everyone seems to be elated that beans are now 0, and I wish I could be excited with them, but I cannot handle eating beans because of their texture (unless we are talking jelly beans)

I have been eating a lot on the go (which explains why I’ve been gaining weight the last few months), but promised myself I would be dedicated to weight loss again after the marathon. Perfect timing that this aligned with the marathon training ending.

(Because I had gained the previous week, it brought my weight to a range where I got 24 daily points last week but I now get 23)

My first real day on plan and I struggled. I had not gone to the store because I slept almost all day Sunday. As a result I ate all my meals out and didn’t make great choices. For breakfast, I had a breakfast burrito and a protein shake with espresso. For lunch, I had a chicken bowl from chipotle and for dinner I made eggs and Kodiak cake pancakes. I sprinkled in some snacks throughout the day but I wasn’t taking advantage of the 0 point foods.

Tuesday was a much better day for dinner I made a quinoa/tofu/broccoli slaw and edamame stir fry which was low in points. Eggs and toast were a low point breakfast, and the deli near me does a grilled chicken breast sandwich which has become my new favorite thing to eat. I ran a few miles, and felt satiated all day.

Day 3: Wednesday, which also happened to be Mr. ftof’s birthday. 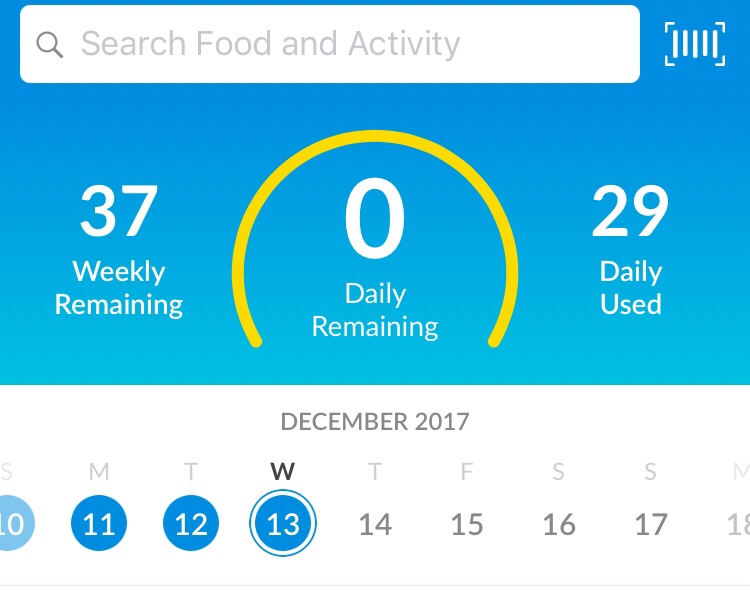 Thank goodness for weeklies because I ended up eating some birthday cheesecake (which I tracked after taking this picture) when Mr ftof and I went to dinner on his birthday. Since I was low on points because I was seduced by candy, I requested that the restaurant make me buffalo wings but use chicken breast instead of wings. I told them it didn’t have to be pretty but that’s what I wanted. They obliged! BAM! This plate was 0 points but I used blue cheese dressing, which I willingly used points on.

I’m realizing that going out to eat is less intimidating than it used to be because previously I would try and make decisions based off of numbers of points from menu items, but now I just look for lean proteins, vegetables, and can ask for substitutions.

Day 4: Thursday, which is also the day I thought would never end.

Poor planning, and the fact that I ran out of my stash of hard boiled eggs at the office meant I didn’t make the best choice and got a breakfast burrito for breakfast, which was higher in points and made me have to adjust accordingly for the rest of the day. For lunch I found some leftover broccoli slaw/tofu/edamame/quinoa stir fry in the fridge which was low in points, and since my better half had to work late that night I made eggs for dinner. 0 points! I cheered with excitement! So did the fire alarm when it went off in my apartment 😤

Day 5: TGIF!<<
idn't take a picture of my tracker, but at the end of a long work day where I left an hour later than I was planning and didn't go running, I had no idea what I was going to have for dinner. I had eaten breakfast and lunch on the go (a protein box from Starbucks for breakfast, and a turkey breast sandwich for lunch), and was determined not to throw in the towel. We went to our local supermarket and I got a miniature burrito from the taqueria stand with lots of shrimp and veggies and a teeny weenie amount of rice and cheese. No sour cream and no guacamole, but I did get some nonfat Greek yogurt to use as sour cream substitute in case the salsa was too spicy. Hmmm…. maybe I can do this plan after all!

Day 6 & 7: the weekend<<
Saturday I managed to stay heavy on my protein (eggs, chicken) and felt satisfied for a long time and within my points. Sunday however, we celebrated Mr. ftof's birthday and you can see the damage….

<<
me things I've learned over the course of the week:

Was my first week perfect? Nope. Definitely room for improvement. But it was pretty darn good, all things considered.

I am gonna have some growing pains figuring structure out with this program but once I do, I know it will be great for me!