On Tuesday, February 6th I was at work, when around lunch time I got a message on Instagram from Weight Watchers (in response to a post I wrote in October), which said they wanted to talk to me and could I please send an email to this staff member whose email address they listed. They have sent me messages before asking if they could share a quote I wrote for a weekly before, so I assumed it was something similar.

I emailed the staff member who emailed me back saying she worked for the Weight Watchers magazine and could we set up a time to talk on the phone. We set an appointment to talk the next morning at 6 AM my time, 9 AM her time. I was suspicious, but thought maybe they wanted me to agree to using a quote in the magazine.

The next morning she did not call me and I felt a little bummed. After some time went on, I emailed and checked in. There had been a schedule mixup so we agreed to chat on my lunch break that day.

On the phone she shared with me that Weight Watchers was writing an article on the “Me Too” movement and had come across this Instagram post I had written, and she was interested in knowing more. After a good long, hearty talk, I hung up and thought maybe they would share my quote in the magazine. I was excited about the possibility that my quote could be shared.

Time went on. I was hopeful that they would use a quote I stated in the magazine but a few days went by and nothing happened so I figured it wasn’t going to happen until…

Sunday, February 11th I got an email that she wanted to talk on the phone. And that call was summed up into this…

“So are you available to fly to New York City next weekend for a photoshoot and an interview for the May/June magazine issue?”

After I said yes in a level of shock that I’ve never experienced before and hung up, I walked into the living room and wept to my husband. I was going to be in a magazine. I was in shock.

The entire next week was a flash of chaos. Emails being introduced to my four fellow members (Tracye, Jen, Megan and Peter), travel arrangements, emails for sizes, emails of photos, rearranging all the plans I had for the weekend and because I was keeping it all top secret “gotta reschedule because a business trip suddenly came up”.

On Saturday, February 17th after an 11 mile run, some last minute pampering, including getting a manicure and pedicure for the shoot and running out last minute to buy a duffel bag so I wouldn’t have to check a bag, it was time to go.

Mr. FtoF drove me to SFO at 9:45 PM to board my red eye flight. I chose a red eye flight to give me a full day in NYC on Sunday. As I boarded the plane for a 1:15 AM takeoff, I still was in shock. Maybe I would get there and this was a prank. Maybe I’m dreaming. But then I managed to fall asleep on the red eye and wake up in sunny, snowy, Newark, New Jersey at 8:50 AM. And after trying to find my driver in a half asleep daze. I finally located him and off we went.

Upon arriving at my hotel which was in Times Square, I was informed my room wasn’t ready yet but they would call me when it was. I left my bags so I could go exploring. The bag check staff asked where I was from and I told them San Francisco (and loved that the staff at bag check started calling me San Francisco 😂)

I left the hotel and found coffee and pizza. I also took a million photos in Times Square of Broadway musicals and selfies. I wanted to see a musical but I knew I wouldn’t have time.

Finally after a few hours of walking, I got a call that my room was ready, which was great because I needed a nap. Desperately.

I woke up a few hours later and met up with three of the photoshoot members and headed out for a run in Central Park. I had run an 11 mile long run on Saturday and my legs were toast but I didn’t care. I told Coach Patrick I wanted to run in Central Park so he put it on the calendar. If I didn’t have a photoshoot, I would have gone for many more miles, but I knew my little legs needed to be in good shape. Look at all that snow! 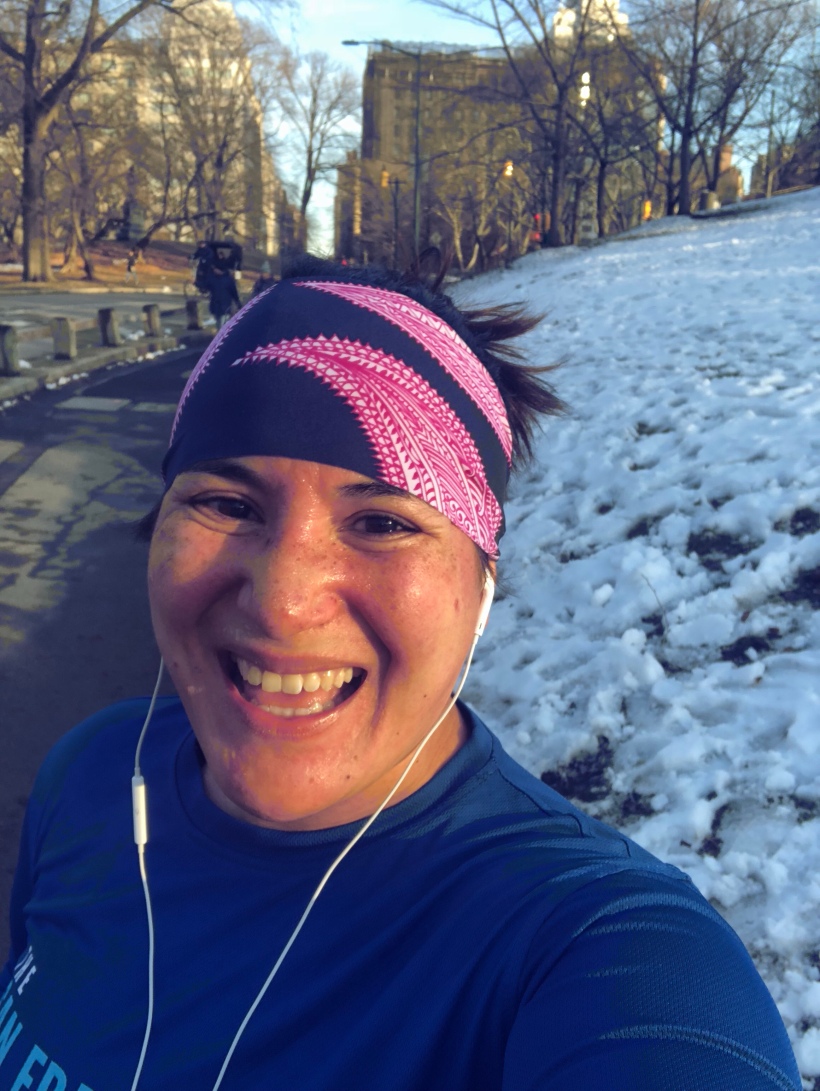 It was time to shower and get ready for dinner. We had a group dinner with some of the WW magazine staff. After hours of talking, sharing, laughing and nerves, my squad took a group selfie and headed to bed because we had a big day ahead of us.

And though I missed my husband and wished he had been there, getting a bed to myself was so delightful. 😍. With the exception of blue cow, the stuffed cow I’ve had for 18 years. Yes I’m 30 years old but she’s my good luck charm and travels to every race with me, so you bet she was coming on this trip!

The alarm went off at 6 AM because I told myself I would wake up early and walk to Grand Central Station. Unfortunately I was so tired from traveling and running I decided to sleep instead since I knew what was coming up. Finally at 8 I rolled out of bed, showered, packed my bag and checked out. My limo service was coming at 9:30. When he arrived we went straight to the studio where they fed us breakfast and the day got started.

Now let me tell you – this model business is exhausting. I am a musical theater performer so I’m used to outfits and changes and hair and makeup but this was something totally different.

It was both the fastest day of my life and the longest day. Fast in that it all happened so darn quickly. Long because it was a lot of sitting and waiting, or outfit changes, or being guided around to stay on schedule. 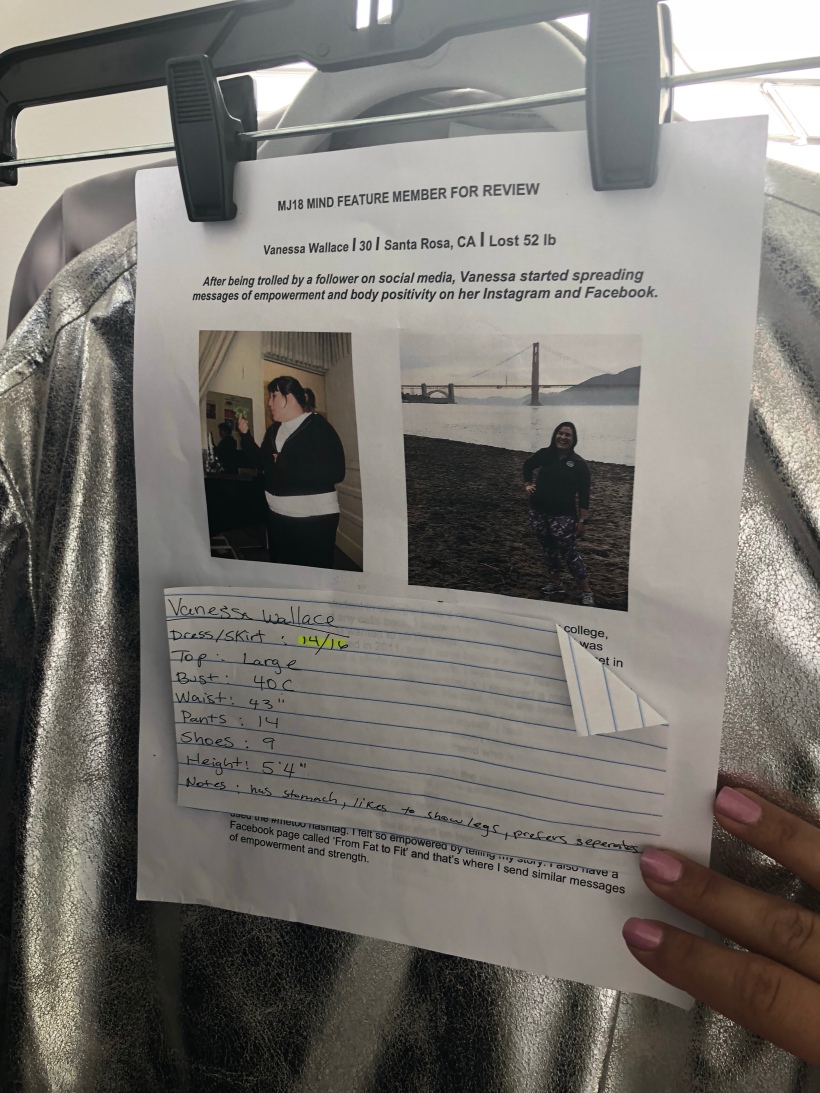 There were racks of clothes and piles of shoes and makeup and hair stations and changing areas and white robes. It was like nothing I’ve ever seen before.

The starting point was that I had to go to wardrobe. I tried on many different outfits because we had to find the one that was just right. Thank goodness I didn’t get hair and makeup done before that because wiggling around in spanx was like a workout. I broke a sweat! It actually took a good long while to find the right outfit. There were two contenders but finally we settled on a third, unexpected outfit, the jumpsuit.

Now I don’t normally wear something like that so I felt totally out of my comfort zone, but everyone told me I looked great which gave me a higher level of confidence.

Being on set was crazy. I was so well take care of! They brought us some delicious, healthy meals. With the exception of the cake they brought out at lunch. It was darn good too. 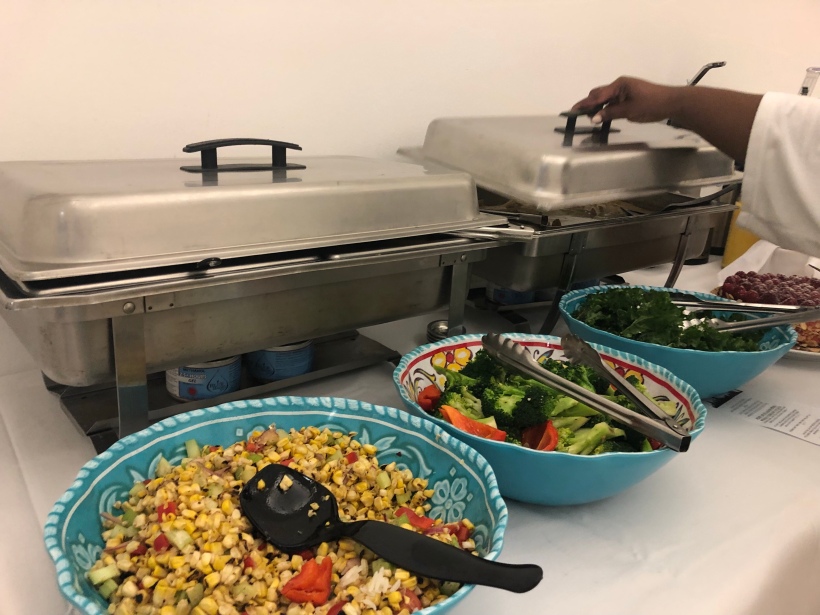 At one point I wanted a bottle of water and someone just got one for me… like, they told me not to get up and get one because they wanted me to rest. Crazy, huh! Especially crazy since my day job involves so much of me tending to other people. It was strange that someone else was tending to me.

First up for me was doing group photos with everyone. They had all done individual photos but yours truly was saved best for last 😂. After our group photos, I did my solo photo shoot and then my video interview.

My video interview was probably what I was most worried about. I was afraid I would cry, or say something stupid. I was worried I would be caught off guard, or speak too quickly. But I just told my story. And it was empowering to speak those words out loud. I often type my story but rarely do I say it verbally.

Then all of a sudden it was time to pack it all up and get in the car to go to the airport. We said a very emotional goodbye and promised we would all meet up again someday and somehow.

On the plane ride home I reflected on the whole thing. I’m very grateful for safe platforms to tell my story and to be part of this really was a top notch experience. As I was running in Central Park with a sort of East meets West mindset, since I was wearing my San Francisco Marathon shirt on the east coast, a thought flashed into my head that losing weight has changed me. Before, I was just alive. But now I’m living. I’m living my best life, I’m living to the fullest and I’m living with enough bravery to face my fears. 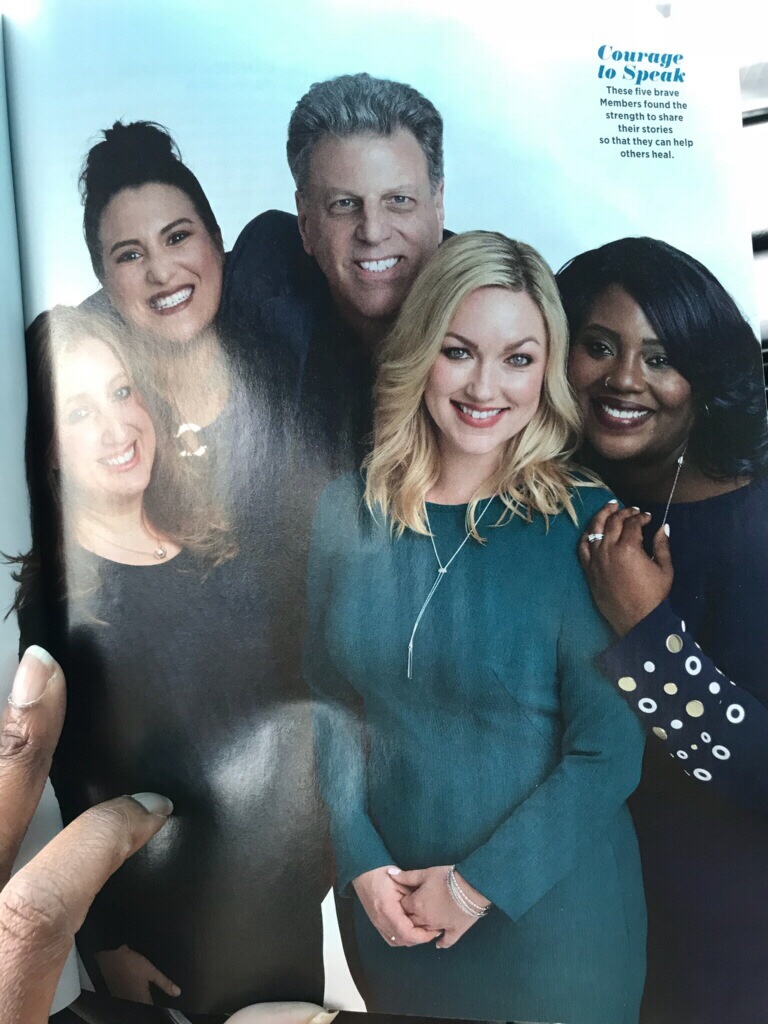 I’m so grateful to have had this opportunity. It has been a life changing experience for me! I am honored that Weight Watchers took on such a controversial topic and I was part of the story telling. Cheers to new adventures!

2 thoughts on “Being in the WW Magazine and How I got there!”