Skip to content
December 9, 2019 Vanessa Goes From Fat to Fit 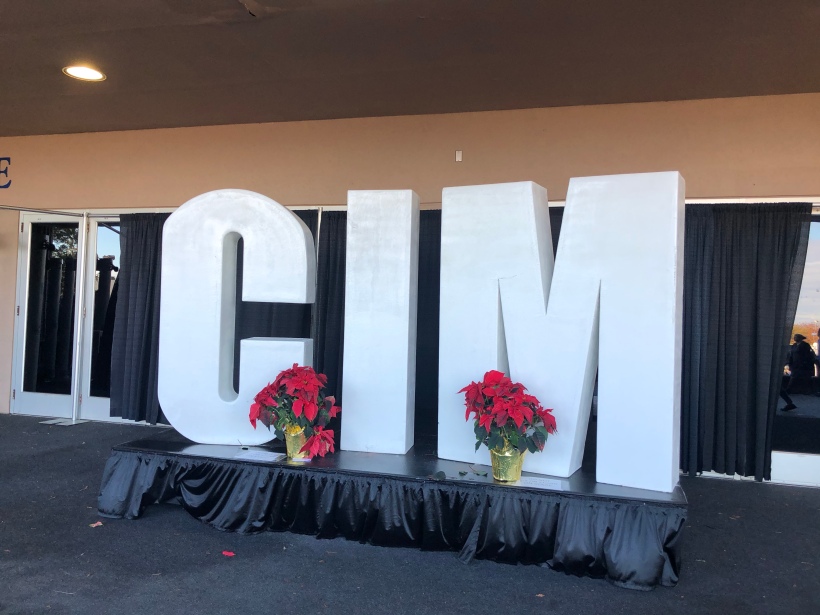 Hi! How are you? Me, I’m great. I ran CIM this year for a third time this weekend. It was great! When I was chosen to be an ambassador for this race back in early 2019, I told myself I was going to lose weight and get super fast for my marathon. That didn’t happen! But despite not being where I thought I would be for the race, I still did it and am excited to recap.

For the last few weeks

For the last few weeks I’ve been debating if I wanted to toe the line for the marathon. In fact, I told a bunch of friends at Berkeley half I was debating it and they totally understood. My mind was so tired of training and I was burnt out. I’ve also been in weird head space for the last few months amongst receiving my sisters cancer diagnosis (she’s doing great by the way!), and though I was putting the work in on early mornings, late nights, and weekends and basically had a part time job training for 26.2, I was not mentally present for marathon training. The last four half marathons I had run were totally garbage paces which made me worried about how Marathon day would go. But fear not – it was awesome.

Friday night I was NOT in good head space. Long story short, I have to have some dental work done (I lost a filling eating a cold chew on my long run the week before) and decided I wanted to try a dentist closer to where I live. My old dentist is a pretty hefty trek from where I live and work. The experience at the new dentist was overwhelming and I was frustrated with what they were charging me AND they told me they couldn’t get me in for two weeks for my filling! I felt defeated over something that’s so simple on Friday night so I called my old dental office and told them I missed them and even though it’s a drive I wanted to keep going there, which felt like a sense of relief. She got me in to the first open appointment the day after the marathon, and I felt like I could go into race weekend knowing resolve was coming. So I woke up Saturday, did a quick shakeout, and we headed to the expo but not without a pit stop for pancakes!

We were scheduled to work the expo as volunteers from 11-1:30. I enjoyed working the info booth and talking to so many people who I know or follow me on social media!

The expo was at a new location, the Sleep Train Arena, because the convention center is under construction. The expo felt much smaller than normal, which made me miss a few booths I usually see there.

(I was featured in the program as an ambassador!)

Eventually we did a quick lap, got our stuff and picked up some items. We got ponchos because rain was predicted for the race, and I also got some Gu’s because I didn’t want to use chews during my race and headed out to get some pizza for a late lunch.

We checked into our hotel after lunch and enjoyed that it was the closest hotel to the finish. The last two years I have been jealous of people staying at the Hyatt because it’s closer to the finish line than the Sheraton (where I usually stay) so we indulged at the Hyatt!

I laid my clothes out and then we went to the pasta buffet that the hotel had for dinner. It was perfect and low stress! So nice to just walk downstairs, eat as much as we wanted and then go back to our room so we didn’t have to drive around town.

I was specific in my outfit choices because it was going to be humid and lots of rain was predicted. I was nervous.

I promptly tucked myself into bed at 7pm and slept like a newborn all night. It was the best sleep.

The alarm went off at 3:30, but then I snoozed for a little while. I threw on some body glide and got dressed. 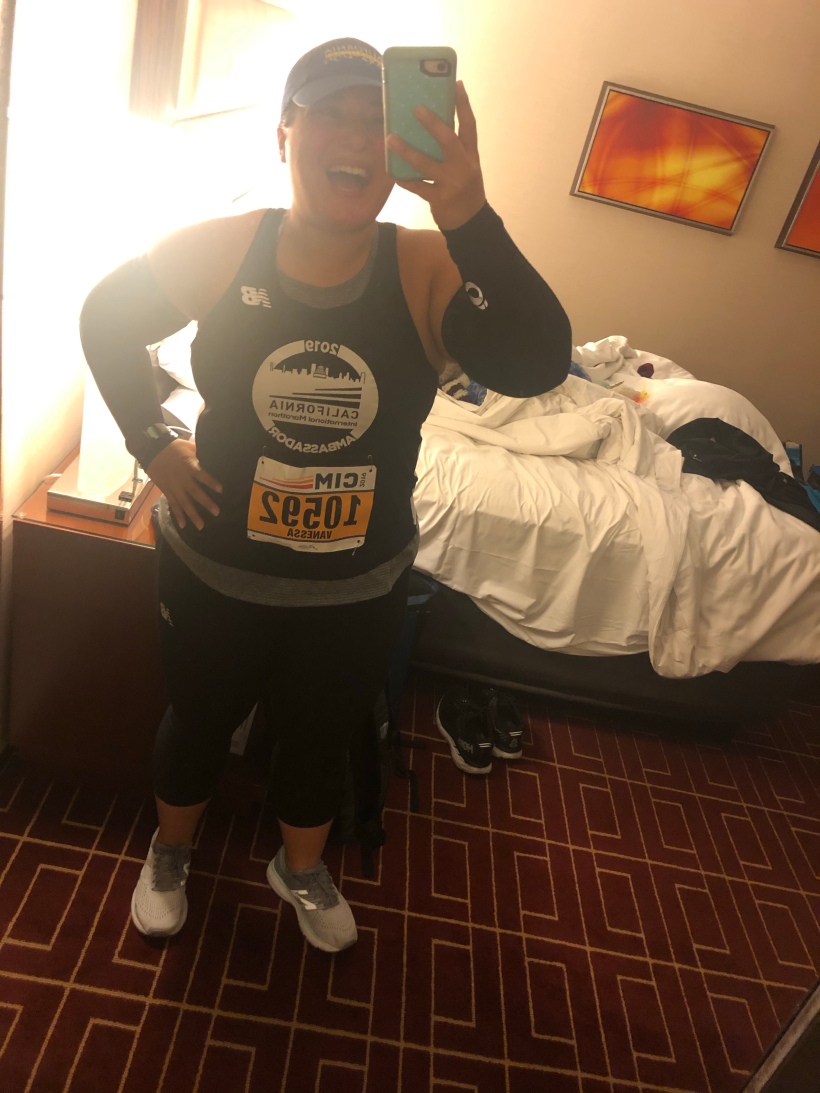 Then we got on the bus at 5:15. The bus ride took 59 minutes. The bus takes you from the finish to the start. If you think 59 minutes was a long ride… the run was gonna be even longer 😂

I was rushing like crazy at the start. I drank my UCan, two potty breaks and dropped my gear bag just in time for the race to start. I was in the last wave which took I think 8 minutes to go through the start after the first corral, but it all whirled by.

My first few miles were good – I mean really good. I mean, I was like who the hell has inhabited my body good. I had a small hope that based off those times I would PR my marathon time but I knew it was unlikely because I would slow down at the end.

I chose to fuel with one Gu every 40 minutes and it was perfect to keep my energy topped off.

The sweeper reached me about 14.75 miles in to the race to let me know that things were going to be broken down as he passed them and I might have to move to the sidewalk if streets opened up. He was a really nice guy and told me I was doing great after I joked with him that I needed a compliment from him. Luckily for me no roads opened up after that and the only things broken down when I got to them were mile markers, which was okay since I had my Garmin.

At 17.75 miles though I had the most horrible running experience. I felt a giant squish in my right shoe. I had grown a blister on my pinky toe and it popped during my run 😖 and it was the MOST painful thing ever. I was afraid I wouldn’t be able to keep going but I was fine after a little while. Then it happened on my left foot about 21 miles in. GROSS AND SO PAINFUL.

I slowed down significantly towards the end of the race. It started to rain, my feet were a wreck from the blister debacle and my quads and hips were so sore and tight. I kept moving forward because stopping wasn’t an option. Some rain kicked in near the 21/22 mile mark and that was not easy either, so I briefly put on the poncho I packed but decided it was too warm for it and tossed it.

Eventually I hit the stretch where I knew I was coming in to the finish line and I tried to give more but I was done at that point, so I chose to stay consistent and finish as best I could. Luckily for me that was great and I ran my 2nd fastest marathon today! 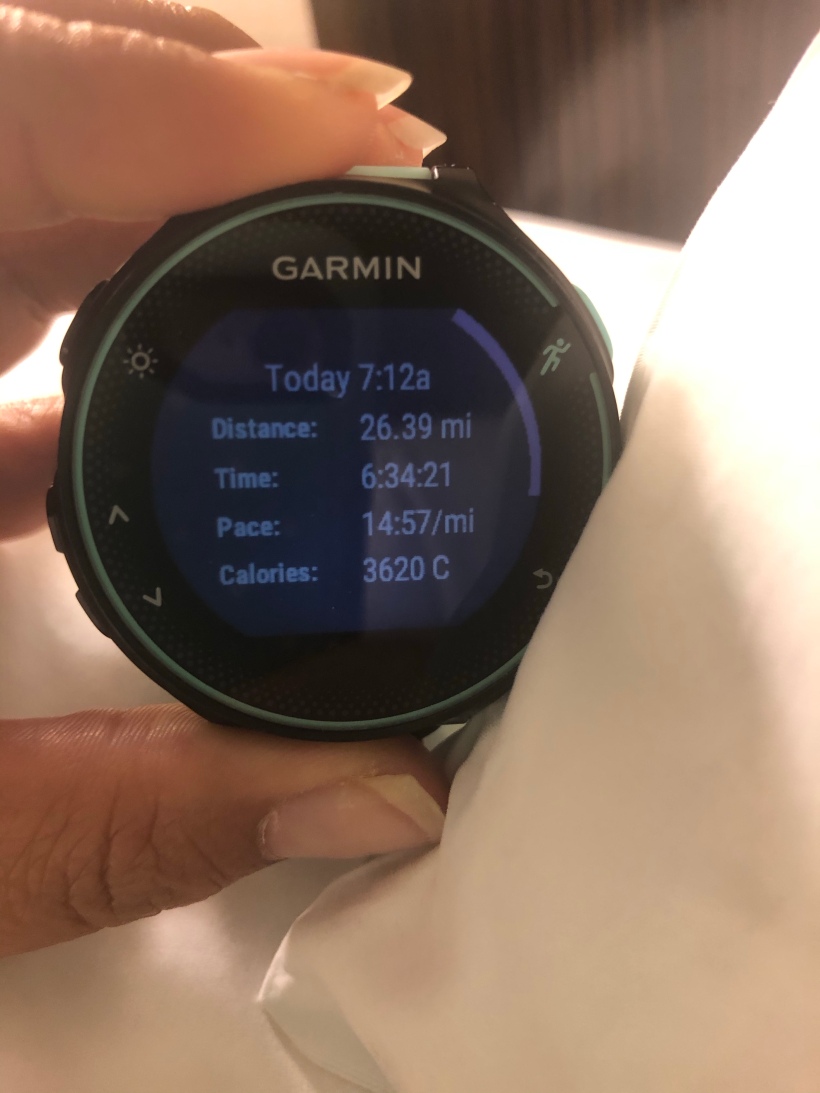 Throughout the race I had the urges to text my friends or message them for motivation but I chose only to message two of my friends each two times to give them updates. I wanted to learn to fight with my own mind this time around. Last year I put out a Facebook call to action for friends to send me messages to help get me through but this year I wanted to be the one doing it for myself. I’m really proud of that.

Finishing was so amazing and I was so proud I stuck with it to finish marathon number 5! 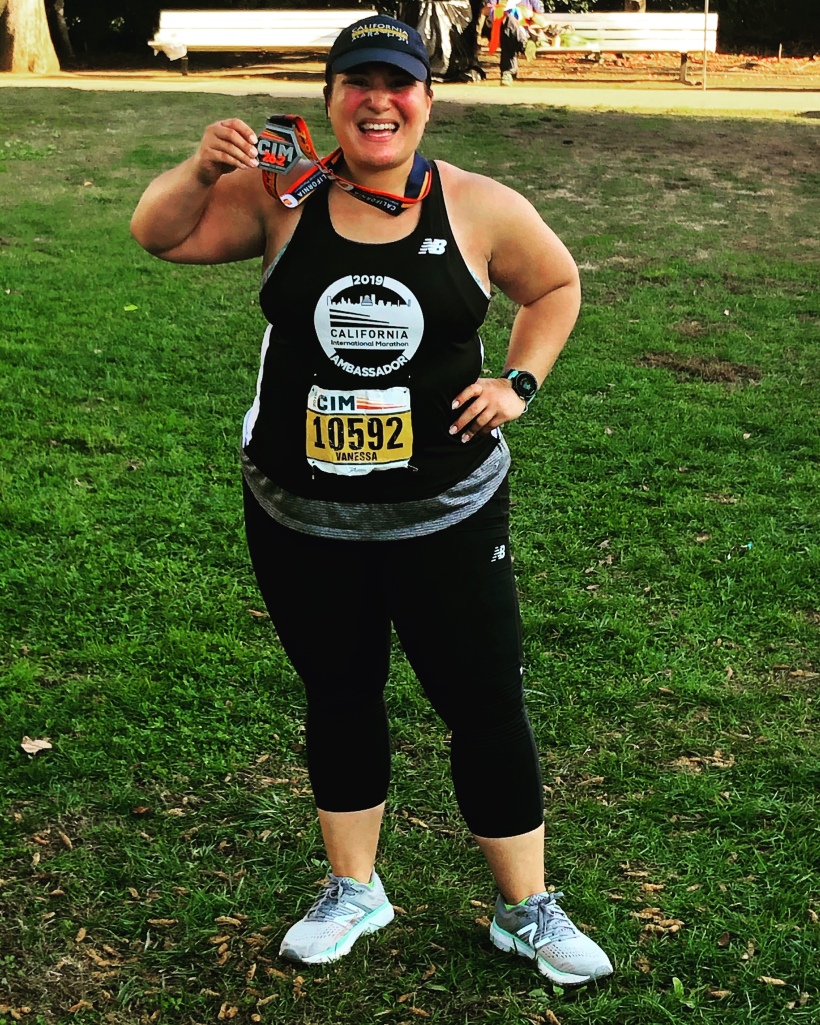 It was also Mr. Ftof’s 5th marathon and my friends Mike and Kerri’s first marathon!

The walk back to the hotel was literally the longest walk ever. Thank goodness I stayed at the close hotel 🤪. The hotel staff wouldn’t wheel me to my room on a luggage rack when my friends asked 😂 but gave me hearty congratulations. 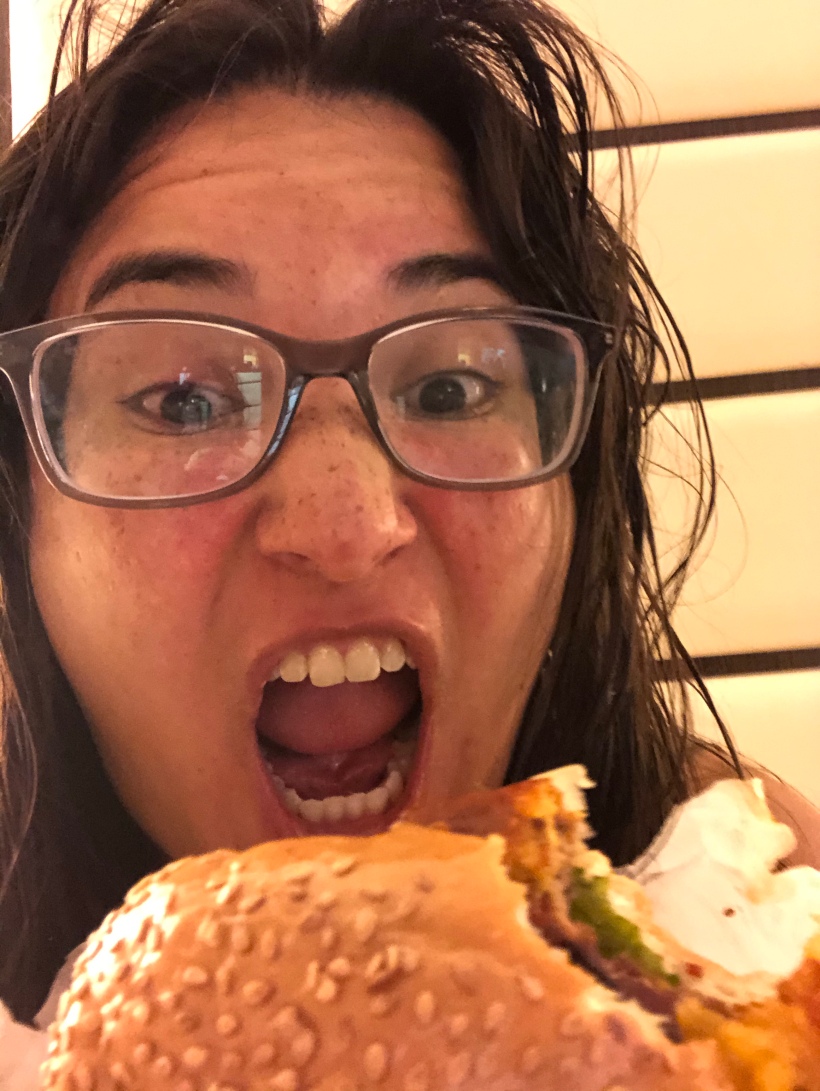 Back at the hotel Mr. FtoF got us burgers and fries and that was amazing. That’s my favorite post race meal! I don’t eat much red meat but immediately after a marathon (and my one ultra) a bacon cheeseburger with a side of fries has always been my go to.

Today was amazing and I’m so glad I showed up. Though I’m not ready to 26.2 again anytime soon, I put my name in for the Chicago Marathon lottery ages ago and hope I get picked when they announce on Thursday!

Thanks for all of your love and support through my journey. This was a great day and I’m grateful to all who said hi to me at the expo or on the course, or virtually cheered for me. You guys rock!