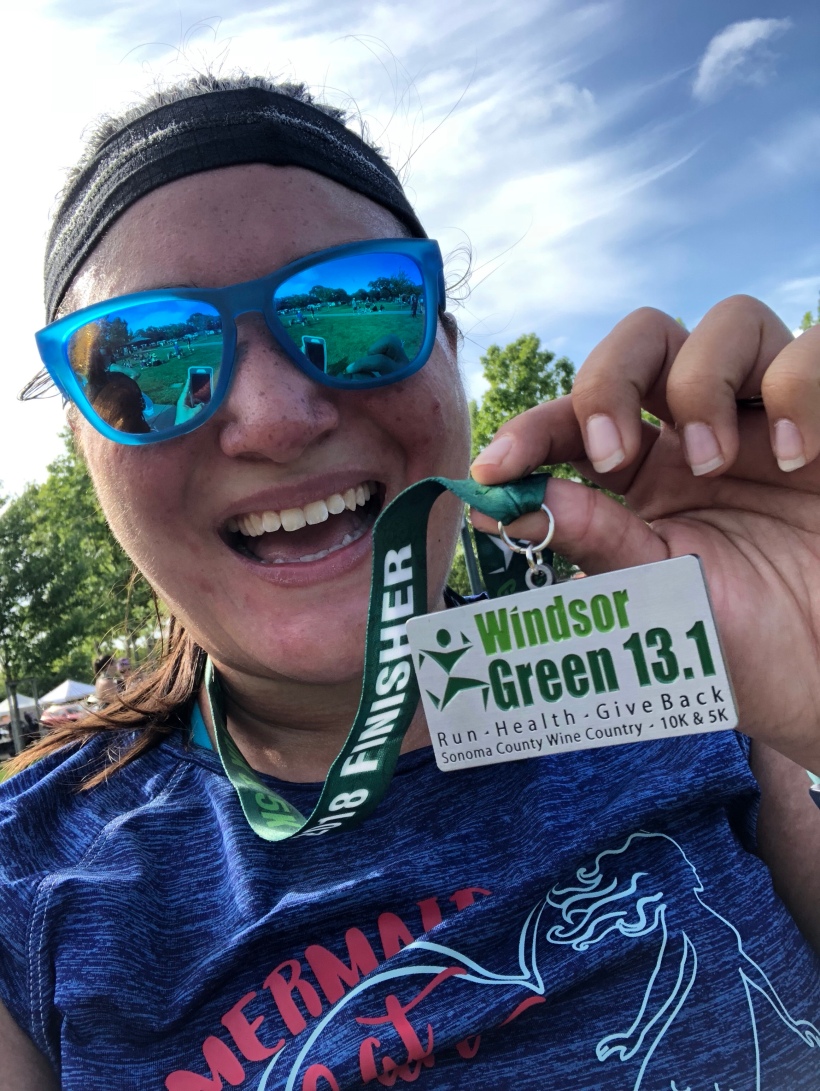 Hi! How are you? Me, I’m great. I had a blast running the Run Wine Country 10k this morning, though my morning really started out very poorly. I mean VERY poorly. As in, I almost didn’t show up to the start because I was having a major pity party for myself, but I’m SO glad I did because it ended up being a REALLY great day for me.

Saturday afternoon Mr. FtoF and I went down to Fleet Feet for packet pick up and while we were there, enjoyed chatting with staff. I found out they carry that sports bra I really like that I bought at Title Nine, but they didn’t have my size so they were gonna order it. Woohoo! I would totally prefer to buy it locally and support the rad team at Fleet Feet than online. We went out to dinner and I had a pork sandwich, side salad and a few fries, and after we had ice cream. I figured this would be a decent dinner since I was only running a 10k the next day. 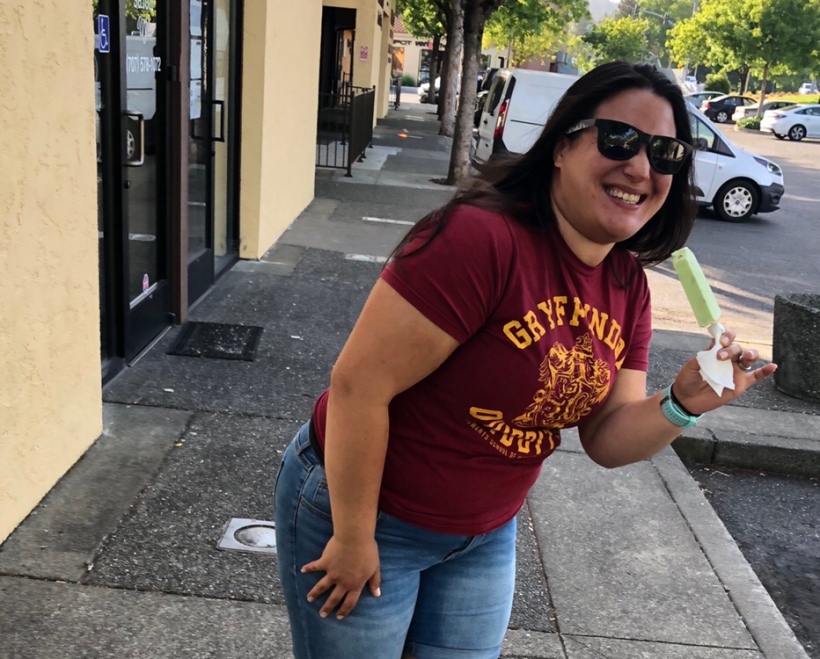 Then I laid out my outfit and went to bed pretty early because I was feeling pretty pooped. Yes, I take my matching very seriously. Pain is temporary but race photos are forever. (I always pick out clothes from my own running wardrobe though cause #nothingnewonraceday)

All hell broke loose in my house. Alarm went off and I hit snooze a few too many times but was still ok and on schedule. I wanted to leave at 6:30 because the event started at 7:40.

First off (TMI warning), I couldn’t go to the bathroom. Like it just wasn’t happening. Squatty Potty didn’t do anything!!!!! This always makes me nervous because I did NOT want any on course surprises 💩. This was a bad sign of how today would go.

Second, I got out of the shower to discover there were ANTS ALL OVER MY KITCHEN TABLE. Mr. FtoF had some sweets from a work event that had to go back to the office but they aren’t going back to the office now because they were infested, along with my table and my floor. So I quickly wiped everything down to the best of my abilities, and knew I had to get a move on. I had no appetite but I forced a few bites of oatmeal down.

Then I went to get dressed. The third layer of meltdown started when I couldn’t figure out where I had put my new, expensive sports bra I wanted to wear. That wasn’t a huge deal since I had just done laundry so I wore one of my other ones. I’ve been spoiled because I own that sports bra and everything else feels inferior now. No big deal. Everything is gonna be JUST FINE. Just GET TO THE RACE.

But then I couldn’t find my Garmin.

I looked in all the usual spots. I tried calling myself from my husband’s phone since I have Bluetooth linked and it buzzes when someone calls me. Nope. Nowhere. Finally after 10 minutes of frustration I just stood in the bedroom and I cried. I was so overwhelmed with everything that the world threw at me this morning. I thought to myself “is this gonna be a race I don’t show up for?!?” I finally gave up on looking (after I’m pretty sure my husband decided he was going to leave me because of my meltdown over my watch), and on my way out the door saw the flashing of my Garmin on the floor near the door. THANK YOU RUNNING GODS. I was seriously anxious. Yes – I am capable of running without a watch but I haven’t done it in so many years and I was NOT mentally ready for today to be that day. Also, thank goodness I found it because there weren’t actually any mile markers on the course 🤔. So then off I went. Except there was no gas in my car so I had to stop to put some in the car. Then I zipped up to the race. Thank goodness I had planned to leave when I did because I left 10 minutes later but was still ok.

Now I ran the 10k last year and the half the year before and it is seriously one of the prettiest races I’ve ever run. Don’t waste your time on the 5k. Run the 10 or the half. You get beautiful views and hot air balloons and a decent amount of rolling hills. I had considered upgrading to the half for today but stuck with the 10k and decided to do a half next weekend instead.

I made it a goal to just have fun and take selfies with everyone I saw that I knew. I definitely achieved that goal! I wrote on my arm “are we having fun yet?” As a reminder to take it slow and easy and just have a blast. Thank goodness I wrote that on my arm since I had my morning meltdown and was not in the right mindset. I was annoyed but when I got to the start my mindset changed.

I got to see lots of people I know, including Coach Patrick (woohoo!), who told me he would be running people in at the end of the race (this is relevant for later).

He gave me a super cool tattoo so I could represent 🙌🏼

Then it was about 12 minutes til race start. And guess what. I STILL HADN’T GONE TO THE BATHROOM. At this point I start panicking. Luckily I had the smarts to look at the course map and knew there were a few portopotties on course if I needed them but SERIOUSLY I was freaking out. I didn’t want any surprises between port o potties.

I gave up on trying to LET IT GOOOO and toed up to the line and off we went at 7:40.

Now, the first mile and a half really sucked for me. And I mean SUCKED. Seriously out of nowhere my calves got super tight, which coincided with an uphill climb. I was afraid I was gonna have to walk the whole race. Fortunately since I had run the 10k last year I knew once you get out of the first hill, it flattens out and I would be ok, so I told myself to walk what I needed up the hill and run the down and flats. I even stopped TWICE to loosen my shoe laces (and still made good time!). I thought to myself “today just isn’t gonna be my day” but I refused to walk back to the start and give up.

Finally I got out of the big incline and my legs loosened up (side note: I think it’s time for a massage for me!), and decided to take some selfies because the view was so beautiful! And check out my cool Mermaid Series shirt!

Miles 2-4 are kind of a blur. Not in a bad way, just in a nothing monumental happened way. I just kept trekking. I didn’t set any intervals for run/walk today like I had for the half marathon in Eugene because I wanted to give myself more flexibility to run when I wanted and walk when I needed. I’m glad I did that. I think I ran more than I would have. I definitely always thank the officers who are out on the course because I appreciate them being out there to keep runners safe, so I said that to all I passed and they all told me great job 😊. (On that note, during CIM, I thanked an officer at mile 10 who responded with “great job, you’re almost there!” which made me die a little inside because he obviously did not know how long a marathon was)

I saw a photographer at one point in there when I was walking and said a loud “sh*t!” because I knew I had to get to running if I wanted a good race photo!!!!

My run paces felt really effortless but when I read my Garmin to see how fast I was going, my paces were incredible! I saw 10:xx mins-11:xx mins and at one point was cruising at what felt like little effort and was at a 9:40! I can’t sustain those for full lengths of time but it feels good that I am really able to run that way and feel effortless.

Finally around mile 4 I knew there would be a water station but there was also an informal mimosa aid station! I’m so mad I didn’t take a photos with the ladies doing that. I did not partake because that would not have ended well for me 😂.

Somewhere around 55 minutes into my run, a bike whizzed past me and told me good job (thanks!), and told me a runner was coming up behind me. Oh… that’s because he was lead cyclist for the first place half marathon runner!!!! Holy smokes those half mary runners are fast. I was passed by about 5 men (didn’t recognize any of them) and the 1st place woman (who I have seen at lots of local races) between mile 4 and the finish. My mind started whirling about the potential of me ever placing in my age group. I’m not there yet, but maybe one day it could happen! Big maybe, but I’m not telling myself I can’t. I CAN work towards anything if I put my mind to it!

I took in a Gu around mile 3.8 but was feeling like I was starting to slow down a bit around mile 4.5, but the gods of the 10k heard my plea because I saw Coach Patrick running up and he ran with me for a little bit and we chatted and it was EXACTLY the boost I needed! He definitely was running me faster than I would have run myself at that point, and when we finally broke from each other so he could run other people in, I felt a second wind to finish strong, which is exactly what I did.

It took a little extra push but I finally rounded the corner and heard people cheering and it felt good to finish really strong. I thought I would finish around 1:24:00, and as I ran I thought maybe I would finish in 1:21, but imagine my surprise when I saw I finished in 1:19!

It has been a good feeling my last two races to pass people in the second half. Not because I want to beat anyone, but because it’s a good reminder to me that I paced myself evenly and didn’t burn out at the end.

And then, suddenly, I was done! It feels weird to be done running after just a 10k since my long runs have been SO long lately. I actually debated going out and running another 2 miles because I felt good but decided to rest for now and maybe do that in the evening if I still had the urge.

But of course, pancakes called.

And I did a lap around the finish line to see if I saw anyone I knew before heading home. Of course, after I left, two friends texted me to ask where I was because they were there 🤦🏽‍♀️. Oh well.

Today was a good boost before Saturday’s half marathon! I definitely need to roll out A LOT this week so I don’t fight my calves on Saturday. I also need to go through my running clothes to find a fabulous outfit to wear 🤔

And on another note…. I still haven’t gone to the bathroom even all these hours later so if anyone has any tips or tricks, I’ll be your best friend!!!!

Cheers runners! Thanks for reading my recap!!