I originally posted this on Facebook July 19, 2016 but am bringing it back now. It’s important.

What I wish someone had told me before I set out to lose weight.

Setting on a journey to lose 110 pounds has by no means, been easy. It has been one of the most rewarding yet the most mentally exhausting things I’ve put forth (marathon training is a close second). While I’m not at goal, I have learned a lot over the past five years about what I wish I had known when I started my weight loss journey.

1. You are going to take two steps forward and one step back on a regular basis. Every time I think I’ve got it “down”, there’s a hitch in the giddy up. I have not just consistently lost weight and made it to goal. I’ve had personal set backs which have caused me to maintain or gain a little weight back and that’s just part of life. Things happen. Situations come up. Vacations, events and rough patches will make you feel like the work you’ve done is instantly undone in moments. But if you keep moving forward you’ll eventually make it.

2. You are going to need to find a balance. Thinking I can lose weight and maintain by living an unbalanced life is not reality. Life cannot be all about zucchini noodles and cardio. Every once in a while it’s ok to veer off plan and skip a workout or eat something that’s not your usual routine. You have to have those things in life to be balanced. You can’t have all or nothing, but you can enjoy indulging in moderation.

3. Sometimes you need to “start over” and sometimes that need to start over will happen many times in one day. There have been so many times my resolve disappears when I walk in the breakroom to refill my water bottle and see the tempting snacks sitting on the table. Sometimes I find myself face first in a brownie, only to pull myself together and find myself face first into another brownie just an hour later. It’s ok to keep starting over. Just don’t quit and don’t beat yourself up.

4. Enjoy every part of your journey along the way. Don’t “wait til I get to goal” to celebrate your body and try new things. Want to go ziplining? Then go! Want to wear a bright red dress to an event? Do it at whatever weight you’re at. Don’t put life on layaway. 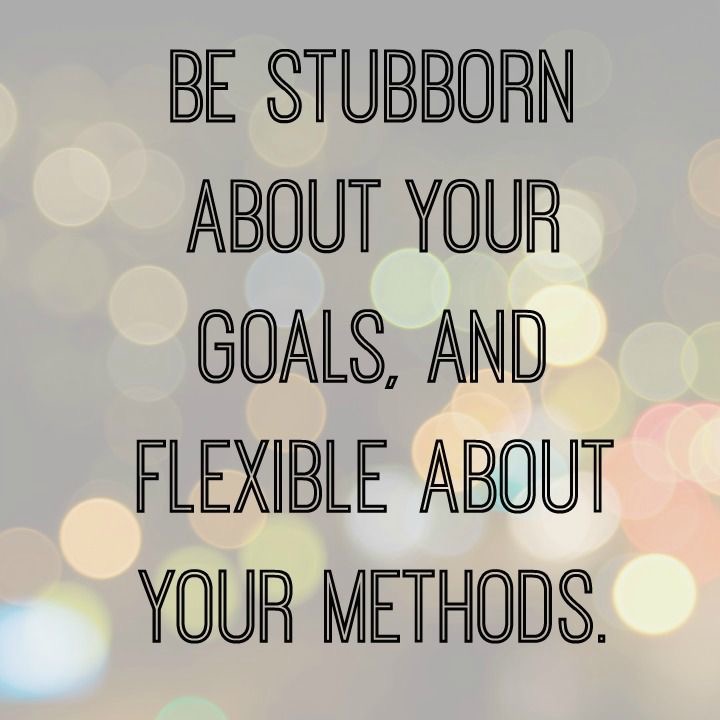 5. Be open and honest about your struggles. Sometimes it can feel like you’re such a martyr for a healthy lifestyle but if you need help then ask for it. You don’t have to always represent the perfect health and fitness guru. We all have struggles. You’ll get out of your struggle easier if you express your feelings.

Losing weight is hard but so is being overweight. Which hard do you choose?

Hi! How are you?  I’m great.  I am enjoying the weekend because I have barely had one off lately so it’s nice to have no commitments. As a result of my lack of anything to do, I decided to go swim suit shopping for my upcoming vacation…

Lately I’ve been really having a hard time with my body image as a result of how much weight I’ve gained. I see myself in two diferent capacities. I see a pair of really strong and fit legs, and I see a really large stomach. Those are the only things I see right now when I look at myself.  It is a strange concept to love half your body so much and be a little disgusted by the other half of it. I knew swimsuit shopping was going to be a mental battle because of that very reason. Those are the two things I see when I put myself in a swim suit.

I live close to an Old Navy so most of my wardrobe is from there (or Lularoe but more on that later in life). That old navy is also where some great moments have happened including my first pair of size ten jeans:

and my first pair of size six shorts: 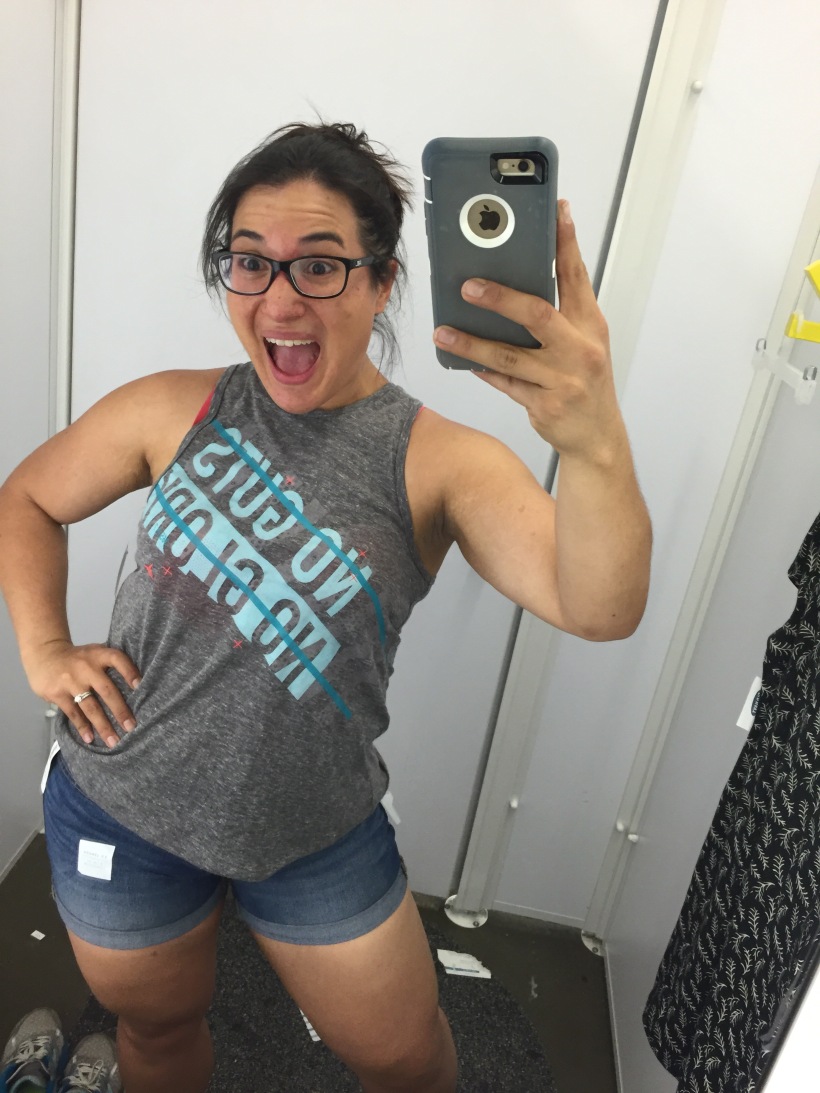 both of those days were amazing. I was so proud of my body. You can tell by my grin.

Today was a little bit of a different story. Last year I told myself I was going to wear a two piece swim suit this summer, so I browsed through the slim pickings available and grabbed multiple sizes and in I went….. (heavy sigh)(brace yourselves)(you’ve been warned)

I stood in the dressing room for a while trying to understand what I was seeing. With the exception of my compression shorts tank, I was feeling pretty good about the bottom half of my body. 👍🏼

But the struggle when I looked at the rest of me was a real eye opener. I flashed back to images of myself back at my highest weight and felt like I was back in that body again. I know I’m not, but it’s alarming how quickly my mind can go from 0 to 264.2 in a matter of seconds.

I flashed back to this version of myself. The one that didn’t run marathons, knew how to order a chicken super burrito with no beans in Spanish at every taqueria, and only ate a vegetable if it was a French fry or a chicken Caesar salad.  The one that didn’t have a weight problem because she wasn’t trying to lose weight so there was no struggle. She didn’t have a body image problem because she had accepted she was fat and that was the end of that. 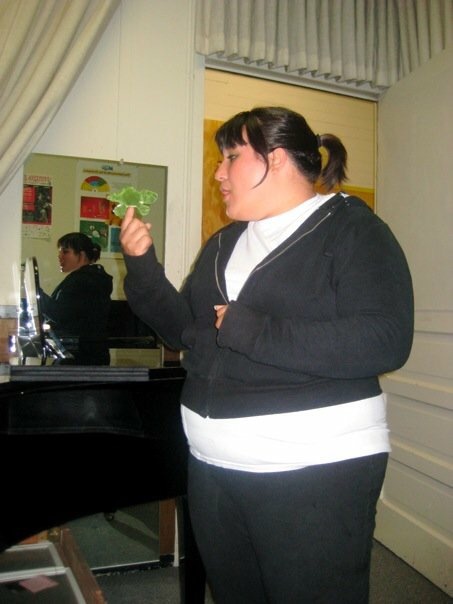 And the feeling of being back in that body  was surreal. When I did a production of Jesus Christ Superstar right before I rejoined Weight Watchers, there was a scene (the temple scene) where I played a prostitute (why the choreographer chose me for that instead of the leper scene I will never understand) and the costume for that made me want to jump off of a freaking cliff. When the costumer handed me my costume I was like “ok funny joke but where’s the rest of the costume to cover me up”. That’s what this swim suit debaucle made me feel like. That moment.  But as a reminder to myself, I’m not where I was. I’m here and now. 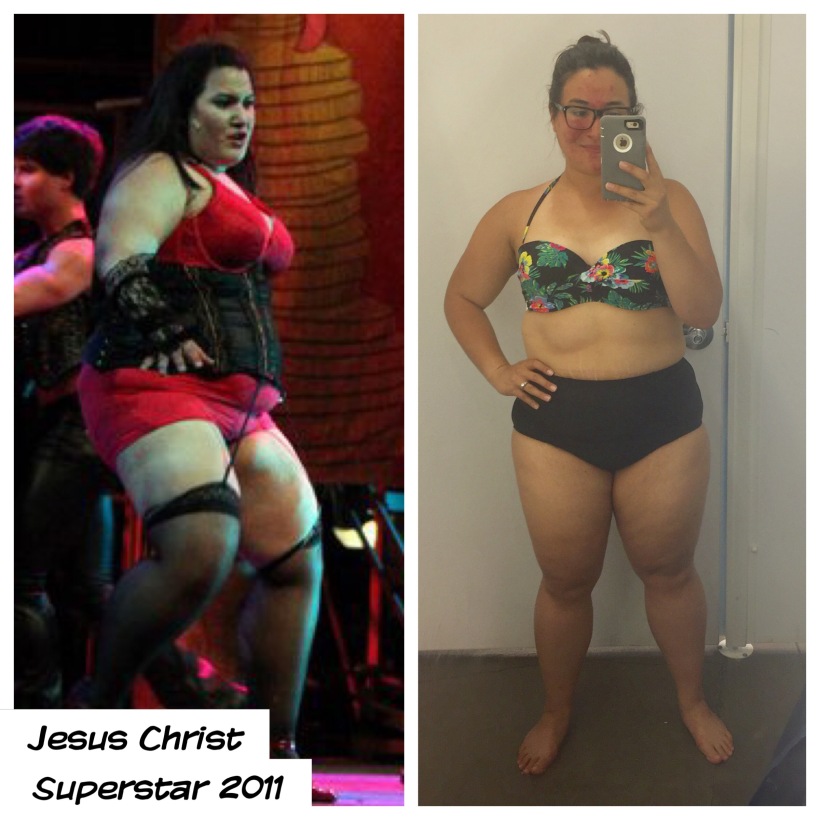 I’m not really sure what I’m getting at here. I guess I wanted to just talk about when your mind doesn’t catch up to your body, even after years and years. Maybe I’ll get there one day. Maybe I won’t. But today I did not purchase the swim suit and I will continue searching until I find one that makes me feel like me.

Mr. Fat to Fit told me he has always thought I was beautiful and doesn’t see me for my size. I need to take a page out of his book and look at myself the same way.