Skip to content
August 26, 2019 Vanessa Goes From Fat to Fit

I have participated in The Santa Rosa Marathon every year for the last five years. When the race is so close to home, how could you not participate in it? My first year, 2015, I did the 5k (before they split it up to the day before the longer races), then in 2016 I did the marathon as my first marathon. Both years were when the course began and ended in Juilliard Park. In 2017 I did the half, last year I did the marathon and this year I did the half, and now the race begins and ends in Courthouse Square just up the street from where it used to start. I knew what to expect going into this race having run it multiple times.

To be honest, I was kind of dreading the race the two weeks leading up to it. I had been working really long days at my job and we had a weird heat wave so I was hardly running because even running in the gym at 5:00 am was hot. Ever since my 50k back in the first weekend of July, I have had something on my calendar every weekend such as a race, wedding, friends in town or a group run out of town, and by the time this weekend rolled around it was the 8th weekend I had a commitment. Toss into that that in July was when I received news about my sister’s recent cancer diagnosis, and a few days later a car accident where someone rear ended me and then I rear ended the person in front of me. I dealt with that for weeks and we are still dealing with it! Before the race I was struggling to find energy and motivation. I slept 10-11 hours multiple nights the week of the race because I think everything caught up to me. But I also knew it was an idiotic move to pass on a race I already paid for and was down the road from me, so I was gonna do it. That wasn’t a question at all. My focus is CIM right now and since I don’t really have any other focuses related to racing or time, I was happy to take it easy this weekend.

I picked up my packet Friday night after work so I could be on my own schedule for Saturday. It was crazy! There were so many people there because you had to get your bib for the 5k/10k that day. I ran into some people I knew and had a great time at Sports Basement. Then I went to pizza with Mr. FtoF, which was funny because when I later looked at my Facebook memories it said I had eaten the exact same meal at the same pizza place one year before!

I woke up early and got in a little shakeout run. I got in two easy miles. 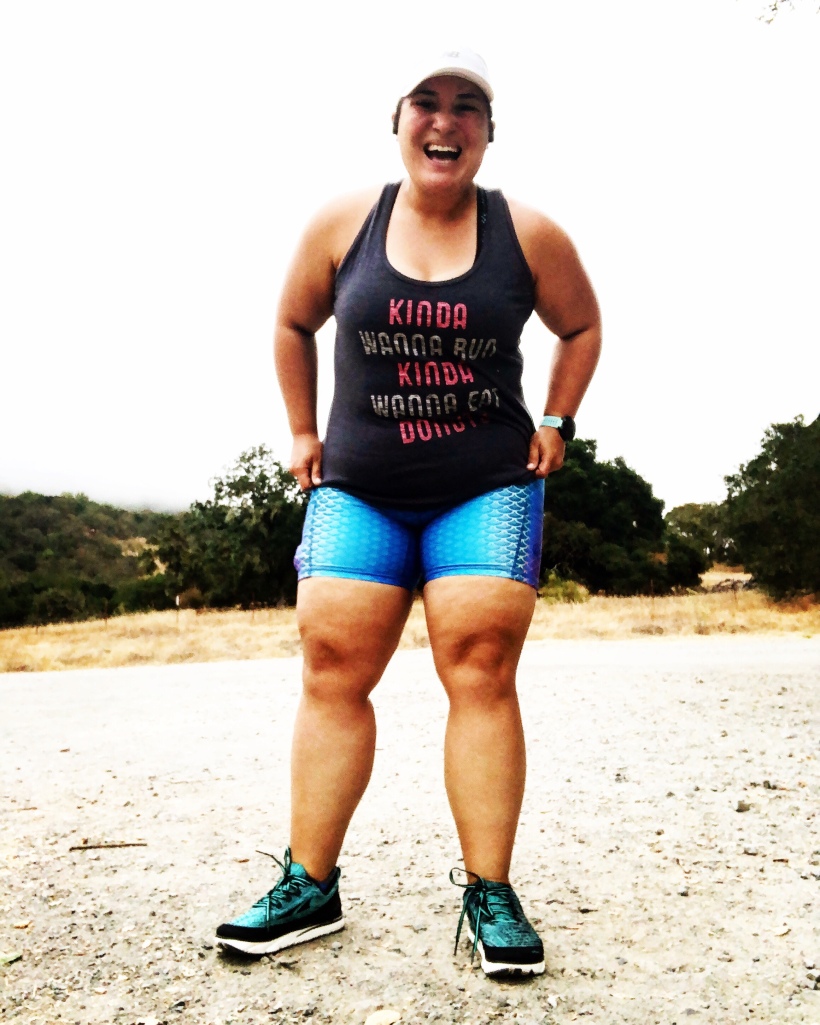 I saw some goats along the way. I love the goats! 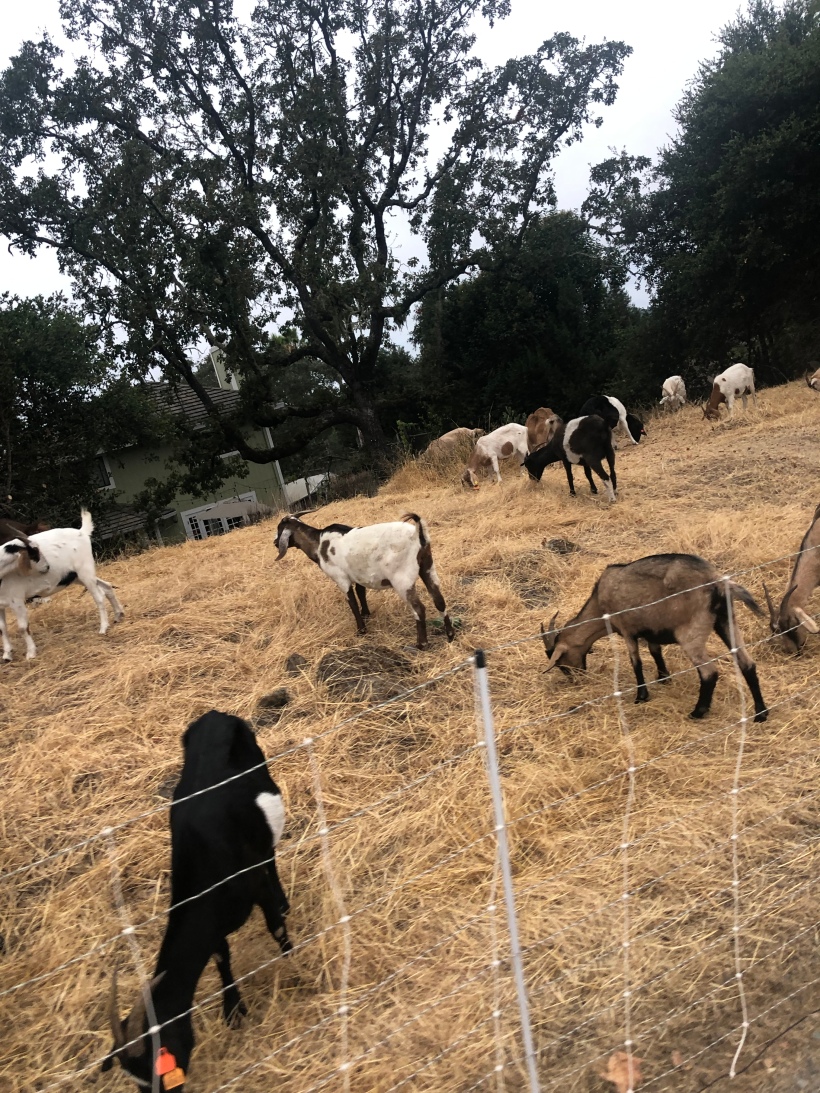 Then I went downtown to cheer for friends running the 5k/10k. I stopped to get a donut for me and Mr. FtoF because I always get a donut from this one donut shop in town the day before a big race, and after that went home and lounged. 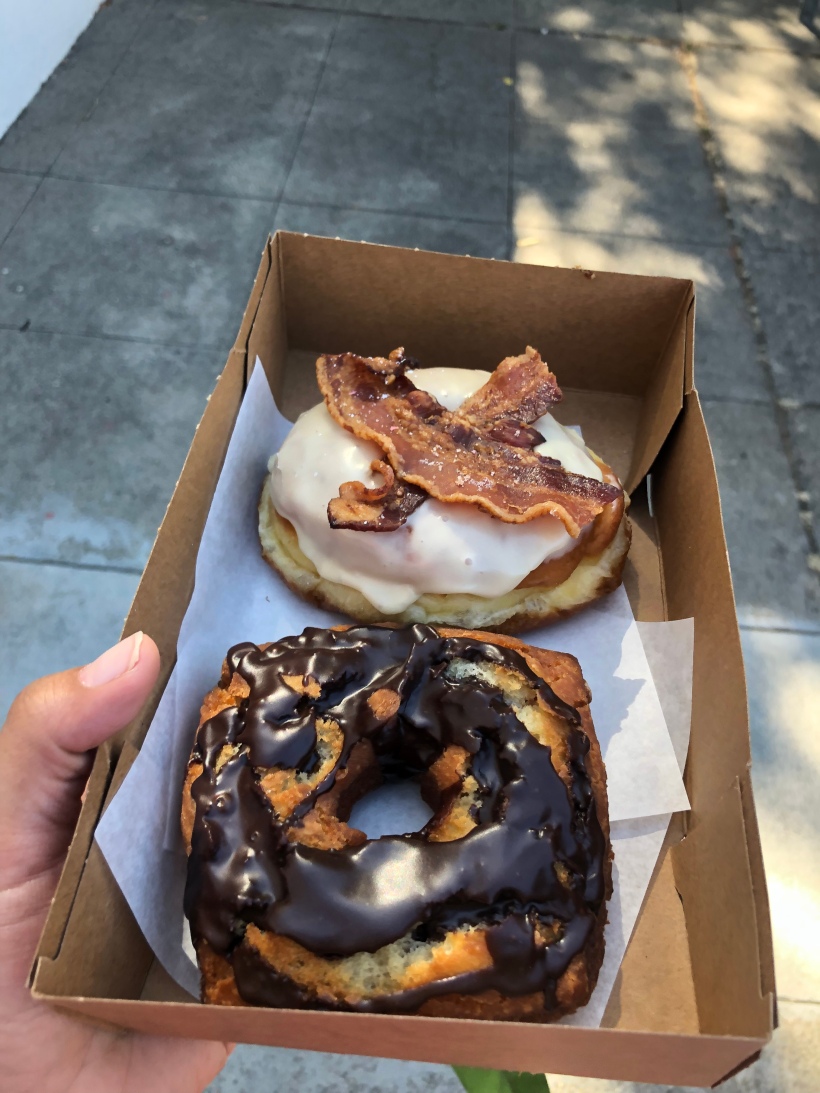 That evening, after I had spent all day on my butt doing nothing, I had friends in town the night before the race and so we enjoyed a lovely dinner together. I have been eating lots of bento boxes as my pre-race dinner. I’ve been stomaching them well. 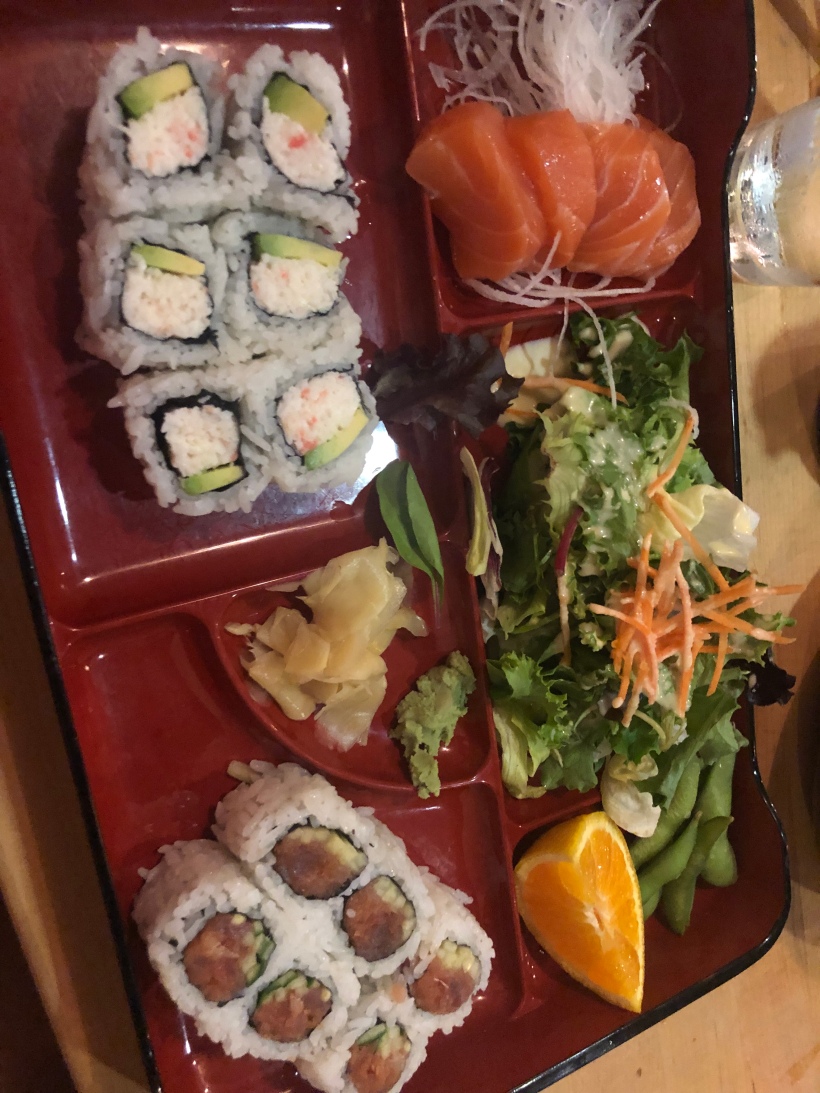 I tucked myself in nice and early, around 9:30 and was soooooo glad I didn’t have to wake up too early! 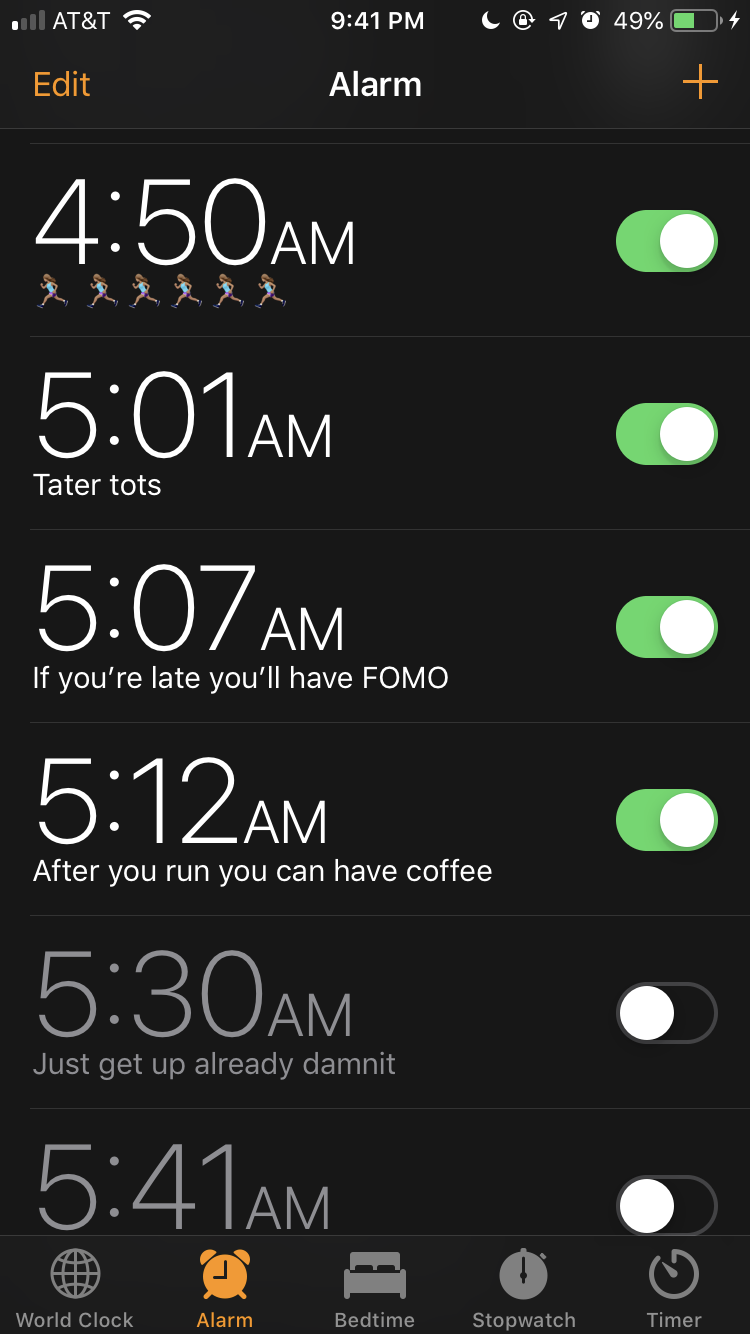 Sleeping in that late is awesome.

I got up around 5:15, took a pre-race shower, got ready and drank my UCan. My husband dropped me off at the start so I didn’t have to deal with parking. I got to the race start around 6:10 just in time to visit with Coach Patrick who was there being a rockstar running coach and cheering for people, and for me to cheer for the marathon runners who were starting! I had a coworker who was running her first marathon (and by the way, she crushed it coming in sub-3!!!) so I saw her and I saw some other friends running the marathon too, gave them a cheer and then after the marathon started, went to the restroom and looked for other friends running the half.

My friend Kerri (who I had dinner the night before) told me at dinner she wasn’t going to run for time like she originally planned so we decided to run the half together (which we also just ran San Francisco together!). I knew that would make today more fun to have someone to talk with! I charged my headphones because I didn’t know if she would want to run with me but luckily didn’t need them! I didn’t have a bag to check though, so I just wore them. 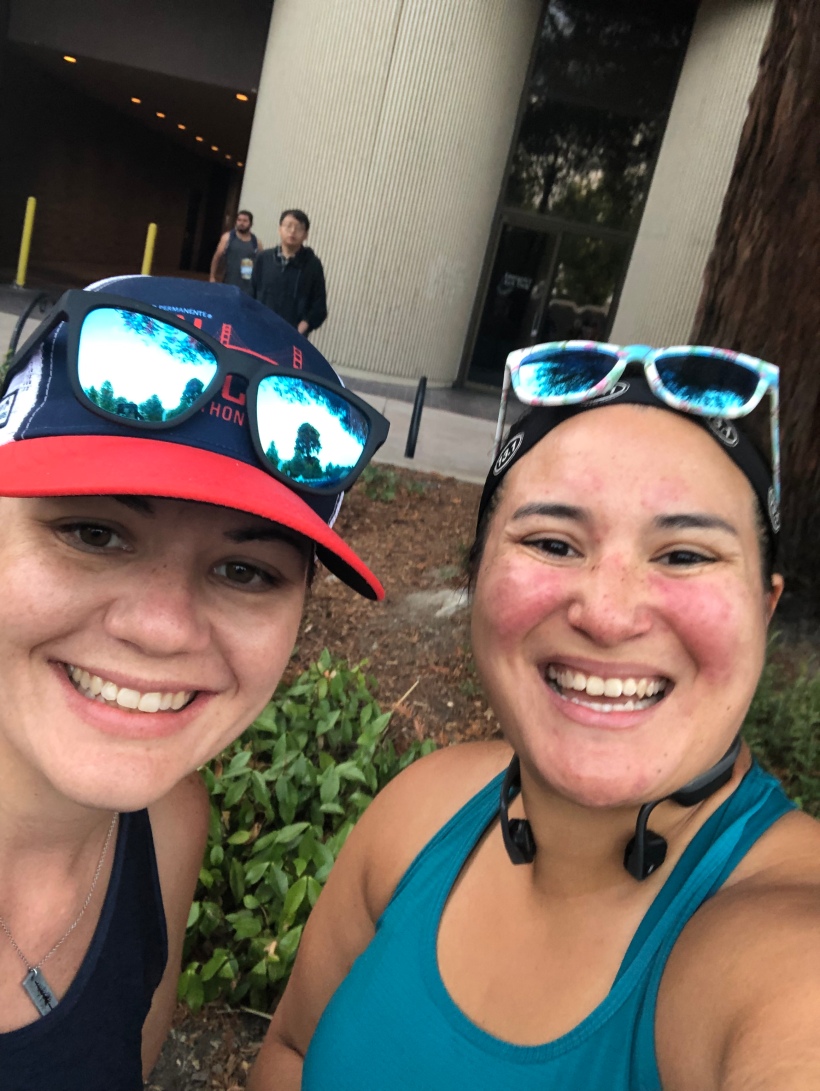 I found her, and for a while we chatted with other friends we found and eventually we were off at 7:15.

Now, today’s race was pretty uneventful. I wasn’t running for any goal except to have fun, so I felt no pressure to perform any particular way. Kerri and I ran and ran and talked about all kinds of great things in our lives. The miles went by pretty fast as a result. Since I know the trail the course goes on like the back of my hand, the race felt easy to break into small chunks because I knew what to expect and how many miles each leg of the trail was. There were some cows out which was the best.

I saw a coworker of mine coming back on the return from the half. He was crushing it with the pace group he stuck with and it was great to see someone I knew crushing their time goal! There’s nothing I love more than cheering for other people who are achieving great personal goals!

Kerri and I made our way to the finish a little over 3 hours after we started. Was good to finish because it was so hot. I am a salty sweater in general but with today’s temperatures it was worse than normal and my face and my arms were caked in salt. It was gross. I was glad to be done and cooling off. A few weeks ago when I ran San Francisco 2nd half I overheated so badly I ended up going to the medical tent for ice and I felt like I was going to throw up. Today was hot but I am glad I didn’t have that same experience. Today was my 19th lifetime half! 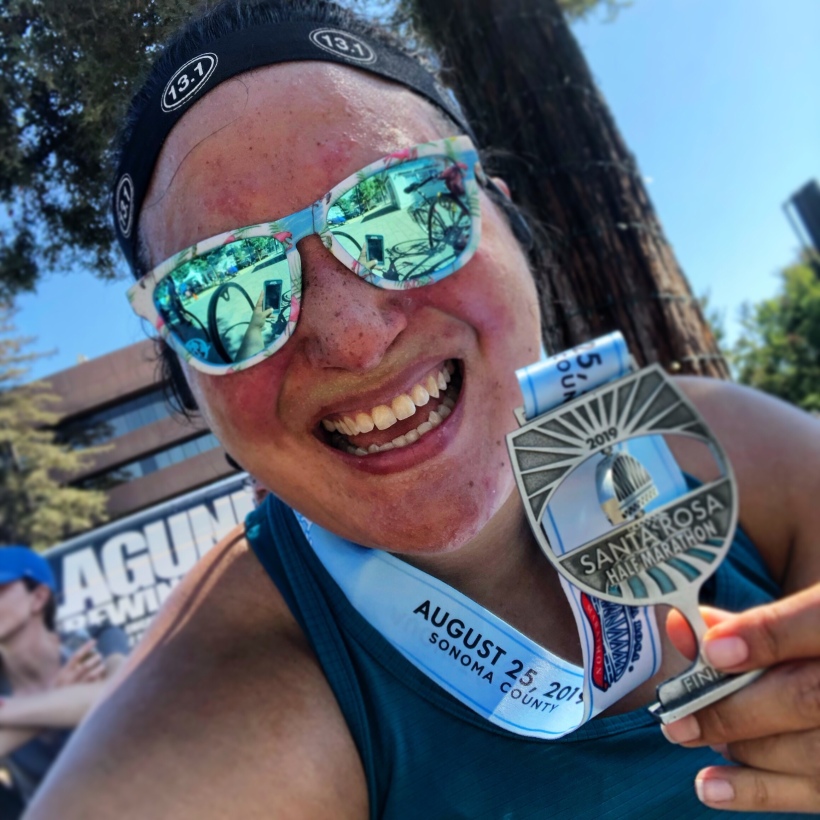 Last year, because I ran the marathon, I did not participate in any of the post race festivities. I was tired and wanted to just go home right away, so I didn’t even get my free race pancakes! This year however… 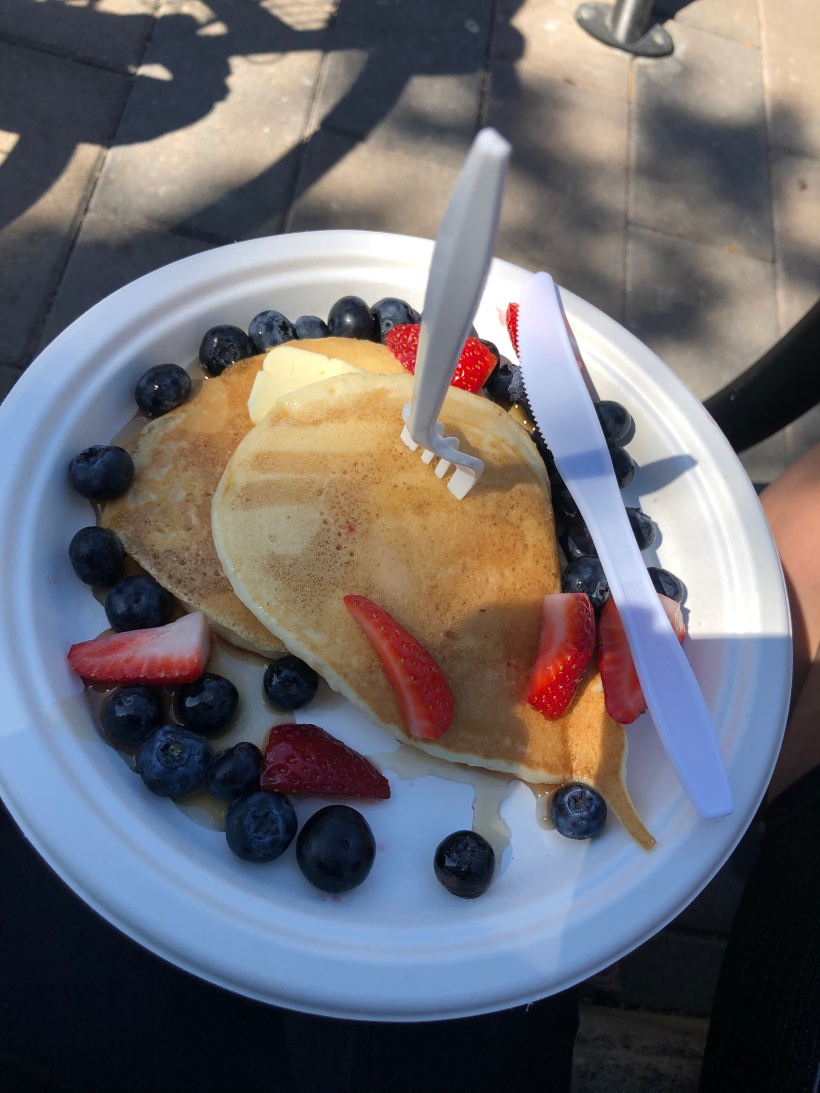 And the race also has a beer tasting festival in the finishers area. Normally that’s not something I do, since I really rarely drink, but I really wanted to let loose a little so had a few samples. Eventually I found myself with a group of other runners doing the Cha Cha Slide and my drink! It was fun! 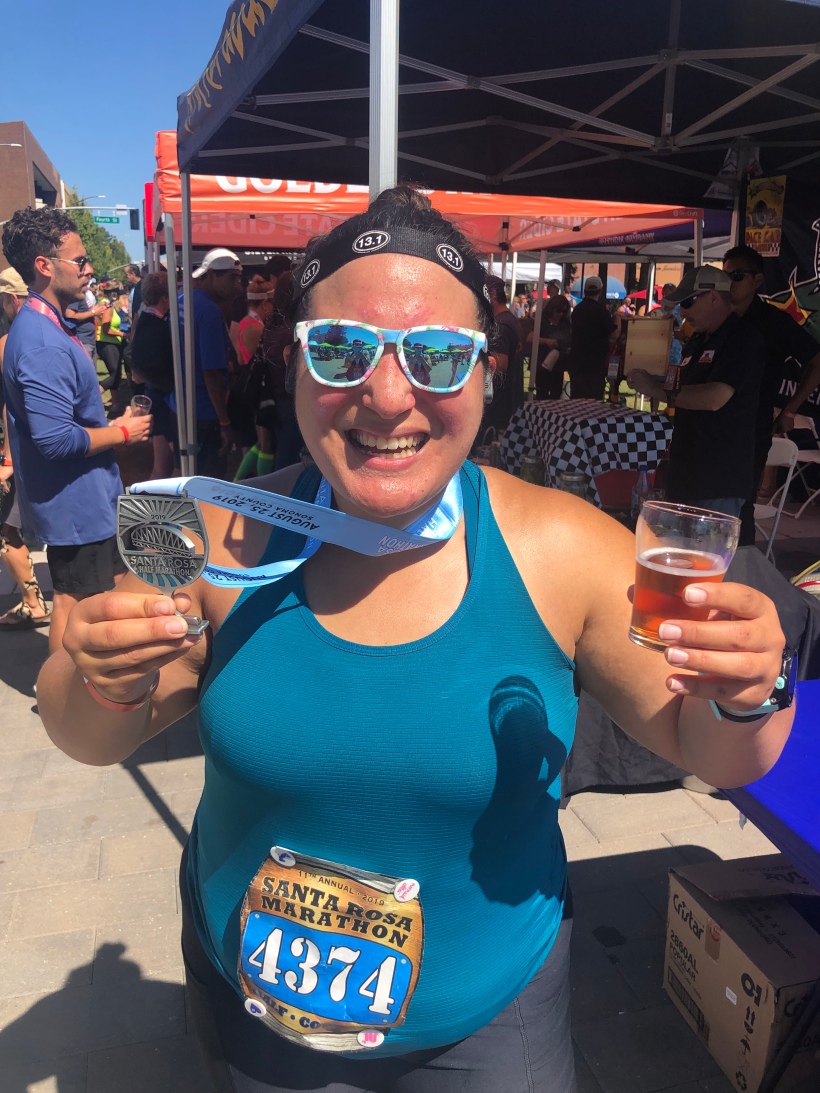 Eventually I headed home and was ready to shower since I felt like a salt block but I would have enjoyed staying longer if I had a change of shoes and if my husband was able to enjoy the beer festival with me.

The race was great, but I also want to confess that the last two months will all the stressors I’ve had have come with some extra pounds and I can feel them. I wasn’t exactly all that skinny to begin with, but carrying these extra pounds is really uncomfortable. While I had a nice race and a great time, I really need to figure out what my mental struggle is right now and what I can do to be successful. Today reminded me of that. I need to really focus on going from fat to fit!

Aside from that though, it was blast this weekend. I don’t have a race until October 6th and I don’t have anything on my personal life calendar until then either. Thank goodness! I’m looking forward to some fun runs and calm times again. But I’m so happy to have done today’s race and will be back next year! Do I keep the every other year marathon vs half pattern though? That’s the big question… 😏