I can’t believe I can say I’m now a 13 time half marathon finisher. Isn’t that like a golden celebration, like when you turn the age of your date of birth?

Last year I signed up for the 2nd half marathon at The SF Marathon (you can do the first half or second half as a 13.1) the day I left my job. I didn’t really know anything about the event but I needed something to lift my spirits.

I knew last year after I ran that event that I would have to do the first half of the course this year because I’m a planner like that 😊. So naturally I signed up ages ago. I never actually got a confirmation email so when I went to the expo to get my stuff, I prayed I was actually registered (they told me over Facebook chat I was but none of their emails came through. So weird). I signed up for this event ages before I was even considering running a marathon at the end of the Summer but fortunately the timing worked out well.

Anyhow, there were some changes to the event after I registered. The first half marathon was supposed to go over the Golden Gate Bridge. It’s a long story, but about 4 weeks before the event it was announced that that would not be happening due to permitting issues. I was bummed but it was what it was and I still wanted to run.

Another item which wasn’t a change but I didn’t learn til just days before the race is that they don’t allow backpacks with bladders on course. I’ve been using my trusty camelbak for ages so that freaked me out. Luckily I found my old handheld and it worked for getting it done.

Coach Patrick and I had decided it would be best to run this all out for a baseline for my upcoming 26.2. I know these events are super different since Santa Rosa is flat and this was not, but I needed some kind of assessment to push myself and feel more grounded for what I can manage on race day.

The event hosts a shakeout run at the expo Saturday morning. I drove down really early and met up with my gal pals and we did the shakeout run and attended the expo together. It was a blast, despite us being slower pace because my friends are awesome at ran at my pace with me, so we lost the group and made up our own shakeout run course. 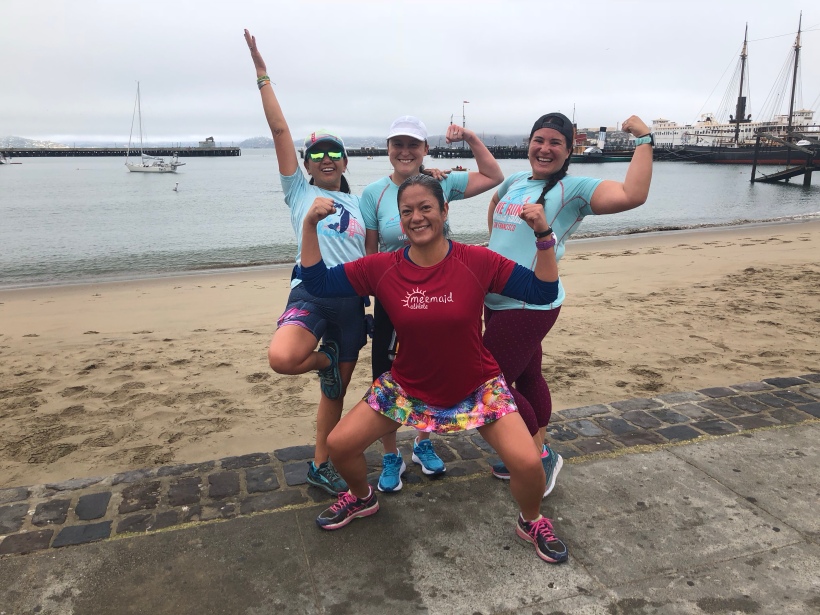 Because the event didn’t allow backpacks, I didn’t have anywhere to put my phone so I bought a SPIbelt at the expo. Nothing else really peeked my interest but we did enjoy lots of photos and giggles. 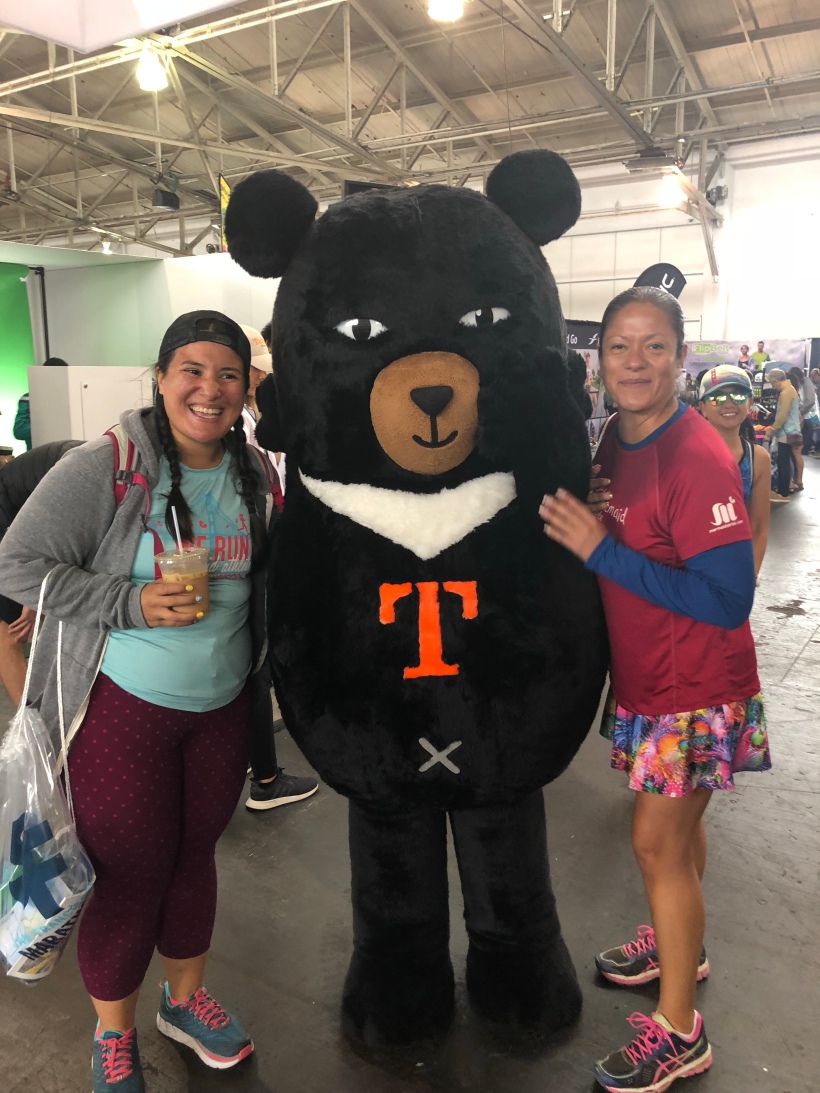 I had brunch AND lunch with my fabulous friends before going to my sister’s and brother in law’s house to have dinner and spend the night. They always spoil me when it’s a race weekend and make me the most delicious meals. 🤤 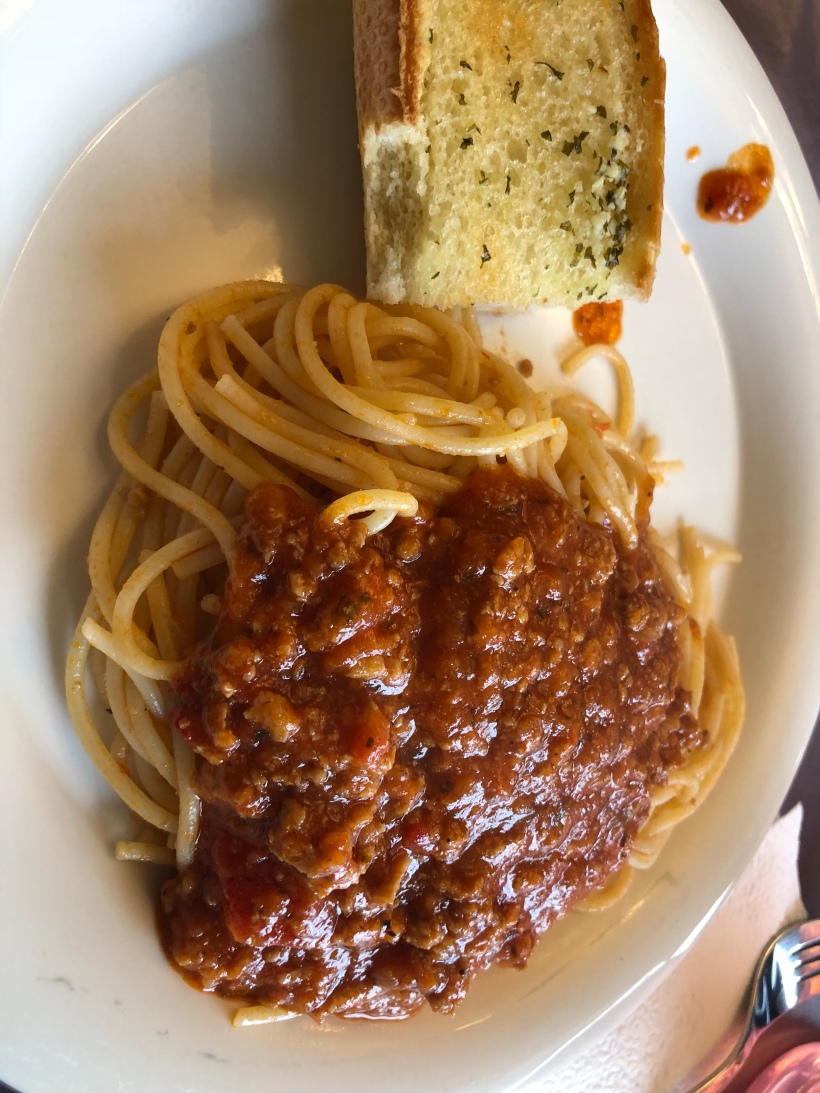 After lots of eating and lots of family time I fell asleep around 9:30 because the alarm was set for 4:40. Clothes were laid out and ready to go.

Clearly the source of my good luck was this awesome drawing my four year old nephew taped on the door for me. 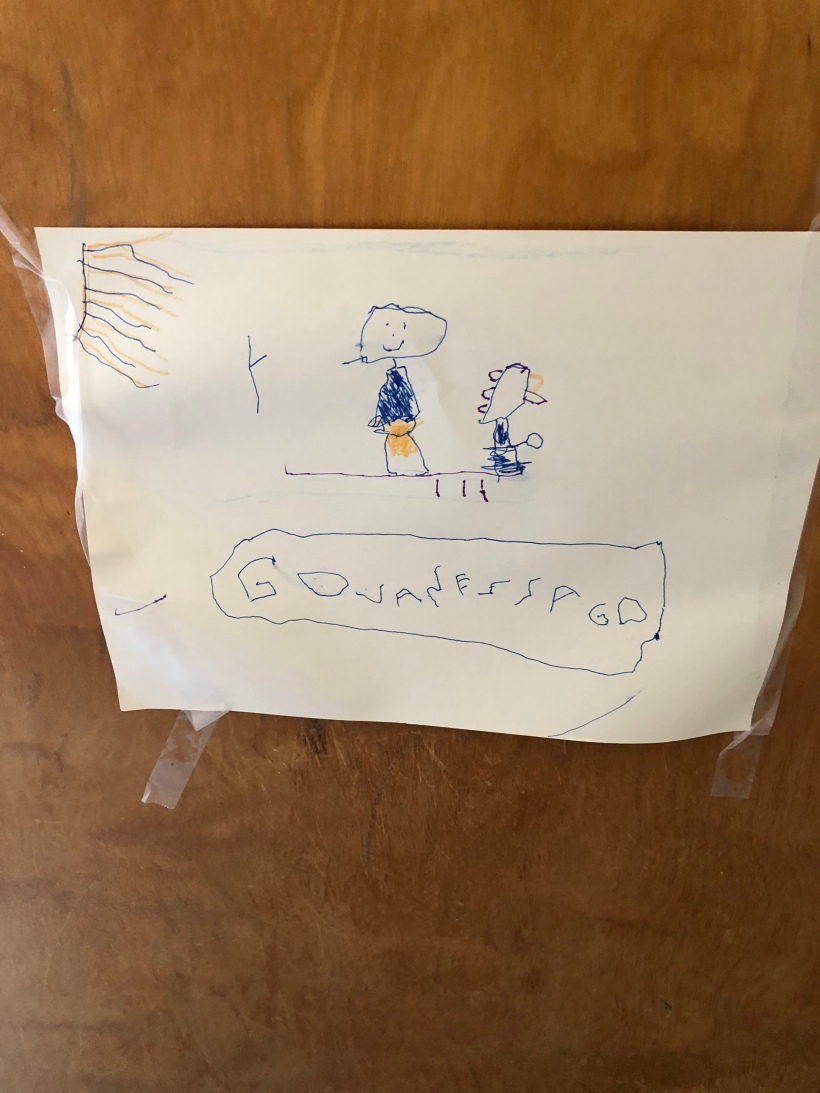 My brother in law gave me a ride to the start which was so generous and great. Dealing with parking down there is a nightmare. I got there as the last few waves of marathon runners was starting, and they announced the first place marathon lead was running a 5:12 pace and was about 10k in at that point 😮😮😮.

My wave was the last wave so we started about 6:50. Off we went.

I had a plan in place for running the event. I told myself to shoot for the first six miles around 1:22-1:24 pace and the run mile 7 and then get the last six miles a little faster than the first six. I knew that was ambitious given that all the hills were in the back half.

My first mile split was pretty solid but I freaked myself out that I wasn’t settling into a groove well. I needed a sign and I got one. My husband and I had our first date at the aquarium on Pier 39, and right as I ran past it “Can’t Stop the Feeling” came on (which was my theme during my first marathon training in 2016) and lasted up until I ran past the restaurant we had dinner at on Fisherman’s Wharf the day be proposed to me. Okay running gods, touché.

As we got into Crissy Field the wind was head on and it was strong. I was not expecting that. It was a beast to run through, and definitely made me make some decisions about how I tackled those miles because I knew I had to save myself for the hills. I stayed even and kept my head down and just barreled through it without trying to push too hard, but it definitely wore me down.

Finally by the time I got to mile 6 some climbing began, with a huge climb at mile 7. I knew I was gonna lose time on the ups so I made up for it on the downhills. It was the only way I could even attempt maintaining a speed.

It was a bummer running with my handheld because I lost time at the aid stations. My backpack can carry 50 ounces and my handheld about 16, and with the amount of fluids I lost running those hills and sweating I knew I had to stop a lot. I stopped at almost every aid station, which really killed me.

After the one big initial climb of a hill going up to the bridge area, the rest of the hills felt a little less daunting. I’m glad I’ve been doing lots of hill running lately. At one point I laughed to myself and thought “a half marathon is basically two Thursday tempo run days since I do like six miles those days”. It really put it into perspective for me.

It was hard to recover after that wind but I knew I had to keep going. I was eating Skratch Labs chews every 45 minutes and taking in Nuun at the aid stations which helped.

I kept a pair of gloves on until mile 6.5. I could have tossed them sooner but wanted to keep them on until after I got out from near the ocean. Glad I kept them on that long. Helped keep me warm without adding an extra layer.

Around mile 9 when I was in golden gate park, my watch flashed a LOW BATTERY signal. Now, I didn’t charge my Garmin the night before because I thought I would be ok and I prayed to the running gods that my battery would last (luckily it did). I laughed because my friend Melissa and I ran at the shakeout run the day before and her watch died and it died when we ran Dirty Dozen, so in my head I thought “quit trying to be like Melissa’s watch and knock it off” 🤣🤣🤣🤣

Honestly miles 9-the end are kind of a blur. I was determined to run the hills which I did. A lot of people slowed down to walk them but I powered up them like a champ. That’s a good feeling.

Things I kind of remember while running:

If you honk at the course monitors because you’re annoyed the road is blocked off, they’ll just smile at you and dance to ignore you and high five the runners

I was glad I decided to run in shorts and a tank even though it was cool temps.

At one point I was trying to do math about how long it would take me to finish. To hard to run and do math at the same time. Stick to one.

I really thought I was gonna come in under 3 hours but missed it by a hair.

I knew the course was going to be long because around mile 5 my watch was not in sync with the mile markers and stayed that way.

Getting to the finish line was amazing. I also felt a little disoriented since I had run so hard. That hasn’t happened in a while. The course was long (13.2) and I got a second medal for running both half marathons back to back. 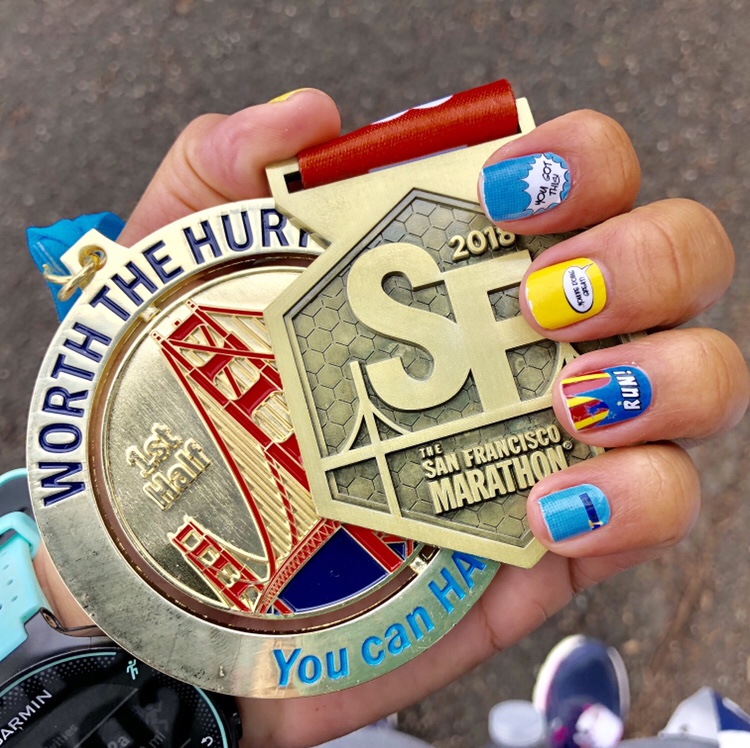 My sister came and picked me up which was awesome. She also brought me a chocolate and a ham and cheese crossaint and some Gatorade. I ate both crossaints. Don’t judge 🤣

I ran negative splits by ten seconds (ILL TAKE IT!) which is a good feeling because my watch said I had 700 feet elevation gain….